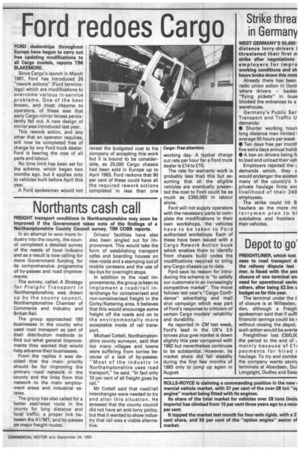 FORD dealerships throughout Europe have begun to carry out free updating modifications to all Cargo models, reports TIM BLAKEMORE.

Since Cargo's launch in March 1981, Ford has introduced 26 "rework actions" (Ford terminology) which are modifications to overcome various in-service problems. One of the best known, and most irksome to operators, of these was that early Cargo mirror lenses persistently fell out. A new design of mirror was introduced last year.

This rework action, and any other that an operator requires, will now be completed free of charge by any Ford truck dealer. Ford is bearing the cost of all parts and labour.

No time limit has been set for the scheme, which began two months ago, but it applies only to vehicles built before April this year.

A Ford spokesman would not reveal the budgeted cost to his company of accepting this work but it is bound to be considerable, as 25,000 Cargo chassis had been sold in Europe up to April 1983. Ford reckons that 90 per cent of these could have all the required rework actions completed in less than one working day. A typical charge out rate per hour for a Ford truck dealer is £14 to £15.

The rate for warranty work is probably less than this but assuming that all the eligible vehicles are eventually presented the cost to Ford could be as much as £350,000 in labour alone.

Ford will not supply operators with the necessary parts to complete the modifications in their own workshops, the vehicles have to be taken to Ford authorised workshops. Each of these have been issued with a Cargo Rework Action book which enables them to identify from chassis build codes the modifications required to bring any Cargo chassis up to date.

Ford says its reason for introducing the scheme is "to satisfy our customers in an increasingly competitive market". The move follows last year's "Cargo Confidence" advertising and mail shot campaign which was part of Ford's response to criticism of certain Cargo models' reliability and durability.

As reported in CM last week, Ford's lead in the UK's 3.5 tonnes plus gvw market is down slightly this year compared with 1982 but nevertheless continues to be substantial. However, its market share did fall steadily during the first few months of 1983 only to jump up again in August.