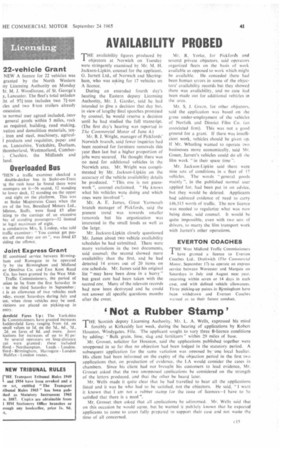 Page 43, 24th September 1965 — 22-vehicle Grant
Close
Noticed an error?
If you've noticed an error in this article please click here to report it so we can fix it.
Keywords : Cities In England, Birmingham, Stoke-on-trent, Bus, Rush Hour, Ford Motor Company

rHEN a traffic examiner checked a double-decker bus in Stoke-on-Trent ig the rush hour he found there were lassengers on it-56 seated, 12 standing he lower deck, 12 standing on the upper and eight on the platform. This was at Stoke Magistrates Court when the ers of the bus, Beresford Motors Ltd., idleton, Staffs, were fined £5 after itting to the carriage of an excessive her of standing passengers-32 instead se legal maximum of eight.

is conductress Mrs. S. Lindop, who told traffic examiner: " You cannot get pasers off once they are on ", was fined £5 aiding the offence.

Joint Express Grant iE combined service between Birmingham and Ramsgate to be operated :ly by the Birmingham and Midland or Omnibus Co. and East Kent Road Co. has been granted by the West MidTraffic Commissioners, the period of ation to be from the first Saturd.ay in to the third Saturday in. September; s is an allowance of two vehicles each rday, except Saturdays during July and ust, when three vehicles may be used. rictions are placed on picking-up in entry.

dersfield Fires Up: The Yorkshire fic Commissioners have granted increases ludderslield fares ranging from Id. on small values to Ed. on the 5d., 6d., 7d., 2d. on fares of 8d. and more. Joint ications for increases of uo to 8+ per by several operators on long-distance 'ces were granted: these included !ford Northampton. Leeds London. !ford Birmingham, HarrogateLondon Halifax London routes.