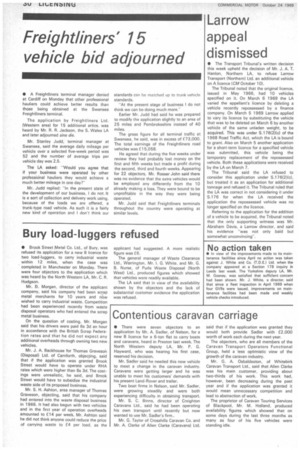 • Brook Street Metal Co. Ltd., of Bury, was refused its application for a new B licence for two loadluggers, to carry industrial waste within 12 miles, when the case was completed in Manchester on Monday. There were four objectors to the application which was heard by the North Western LA, Mr. C. R. Hodgson.

Mr. D. Morgan, director of the applicant company, said his company had been scrap metal merchants for 10 years and now wished to carry industrial waste. Competition had been experienced recently from waste disposal operators who had entered the scrap metal business.

On the question of costing. Mr. Morgan said that his drivers were paid 6s 3d an hour in accordance with the British Scrap Federation rates and that he did not expect any additional overheads through owning two new vehicles.

Mr. S. H. Ashton, area manager of Thomas Graveson, objecting, said that his company had entered into the waste disposal business in 1966. It had also begun with two vehicles and in the first year of operation overheads amounted to £14 per week. Mr. Ashton said he did not think anyone could reduce the price of carrying waste to £4 per load, as the

applicant had suggested. A more realistic figure was £6.

The LA said that in view of the availability shown by the objectors and the lack of substantial customer evidence the application was refused.