Lorries can be quiet 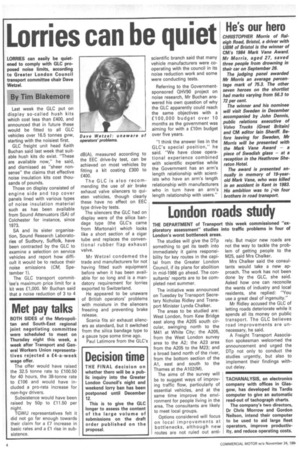 Page 6, 24th November 1984 — Lorries can be quiet
Close
Noticed an error?
If you've noticed an error in this article please click here to report it so we can fix it.
Keywords : Noise Reduction, Hush Kit, Goldie Lookin Chain, Truck, Noise Regulation

Last week the GLC put on display so-called hush kits which cost less than £400, and announced that in future these would be fitted to all GLC vehicles over 16.5 tonnes gvw, starting with the noisiest first.

Those on display consisted of engine side and top cover panels lined with various types of noise insulation material such as has been available from Sound Attenuators (SA) of Colchester for instance, since 1973.

SA and its sister organisation, Sound Research Laboratories of Sudbury, Suffolk, have been contracted by the GLC to examine a selection on service vehicles and report how difficult it would be to reduce their noise emissions (CM, Spetember 1).

The GLC transport committee's maximum price limit for a kit was £1,000. Mr Buchan said that a noise reduction of 3 to 4 dB(A), measured according to the EEC drive-by test, can be achieved on most vehicles by fitting a kit costing £300 to £400.

The GLC is also recommending the use of air brake exhaust valve silencers to quieten vehicles, though clearly these have no effect on EEC type drive-by tests.

The silencers the GLC had on display were of the silica bandage type (the GLC's came from Martonair) which looks like a short section of a cigar tube and replaces the conventional rubber flap exhaust valve.

Mr Wetzel condemed the trade and manufacturers for not having fitted such equipment before when it has been available for so long and is a mandatory requirement for lorries exported to Switzerland.

He appeared to be unaware of British operators' problems with moisture in the silencers freezing and preventing brake release.

Scania fits air exhaust silencers as standard, but it switched from the silica bandage type to a gauze type some time ago.

Paul Latimore from the GLC's scientific branch said that many vehicle manufacturers were cooperating with the council in its noise reduction work and some were conducting tests.

Referring to the Governmentsponsored QHV90 project on noise research, Mr Buchan answered his own question of why the GLC apparently could reach the same objectives with a £1 0 0,0 00 budget over 10 months as the government was aiming for with a £10m budget over five years.