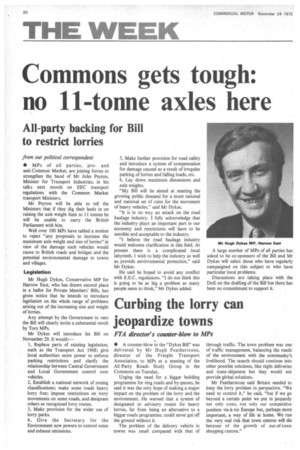 Page 22, 24th November 1972 — Commons gets tough: no 11-tonne axles here
Close
Noticed an error?
If you've noticed an error in this article please click here to report it so we can fix it.
Keywords : Truck, Lorry, Haulage, Politics

from our political correspondent

• MPs of all parties, proand anti-Common Market, are joining forces to strengthen the hand of Mr John Peyton, Minister for Transport Industries, in his talks next month on EEC transport regulations with the Common Market transport Ministers.

Mr Peyton will be able to tell the Ministers that if they dig their heels in on raising the axle weight limit to 11 tonnes he will be unable to carry the British Parliament with him.

Well over 100 MPs have tabled a motion to reject "any proposals to increase the maximum axle weight and size of lorries" in view of the damage such vehicles would cause to British roads and bridges and the potential environmental damage to towns and villages.

Legislation Mr Hugh Dykes, Conservative MP for Harrow East, who has drawn second place in a ballot for Private Members' Bills, has given notice that he intends to introduce legislation on the whole range of problems arising out of the increasing size and weight of lorries.

Any attempt by the Government to veto the Bill will clearly invite a substantial revolt by Tory MPs.

Mr Dykes will introduce his Bill on November 29. It would: 1, Replace parts of existing legislation, such as the Transport Act 1968; give local authorities more power to enforce parking restrictions and clarify the relationship between Central Government and Local Government control over vehicles.

2, Establish a national network of zoning classifications; make some roads heavy lorry free; impose restrictions on lorry movements on some roads, and designate others as recognized lorry routes.

3, Make provision for the wider use of lorry parks.

4, Give the Secretary for the Environment new powers to control noise and exhaust emissions. 5, Make further provision for road safety and introduce a system of compensation for damage caused as a result of irregular parking of lorries and falling loads, etc.

"My Bill will be aimed at meeting the growing public demand for a more rational and national set of rules for the movement of heavy vehicles," said Mr Dykes.

"It is in no way an attack on the road haulage industry. I fully acknowledge that the industry plays an important part in our economy and restrictions will have to be sensible and acceptable to the industry.

"1 believe the road haulage industry would welcome clarification in this field. At present there is a complicated local labyrinth. I wish to help the industry as well as provide environmental protection," said Mr Dykes.

He said he hoped to avoid any conflict with E.E.C. regulations. "I do not think this is going to be as big a problem as many people seem to think," Mr Dykes added. A large number of MPs of all parties has asked to be co-sponsors of the Bill and Mr Dykes will select those who have regularly campaigned on this subject or who have particular local problems.

Discussions are taking place with the DoE on the drafting of the Bill but there has been no commitment to support it.