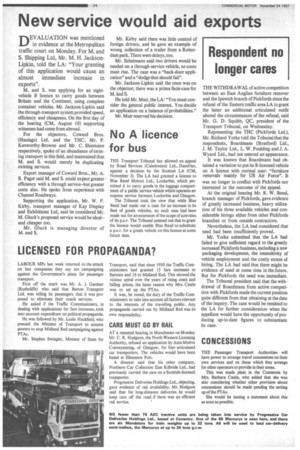 Page 36, 24th November 1967 — New service would aid exports
Close
Noticed an error?
If you've noticed an error in this article please click here to report it so we can fix it.
Keywords : Christoph Willibald Gluck, Lipkin, Kirby

DEVALUATION was mentioned in evidence at the Metropolitan traffic court on Monday. For M. and S. Shipping Ltd, Mr. M. H. JacksonLipkin, told the LA: "Your granting of this application would cause an almost immediate increase in

M. and S. was applying for an eightvehicle B licence to carry goods between Britain and the Continent, using complete container vehicles. Mr. Jackson-Lipkin said the through-transport system provided speed, efficiency and cheapness. On the first day of the hearing (CM, August 18) supporting witnesses had come from abroad.

For the objectors, Coward Bros. (Haulage) Ltd, and the THC, Mr. P.

Kenworthy-Browne and Mr. C. Shiemann respectively, spoke of an abundance of existing transport in this field, and maintained that M. and S. would merely be duplicating existing services.

Export manager of Coward Bros., Mr. A. B. Paget said M. and S. could expect greater efficiency with a through service—but greater costs also. He spoke from experience with Channel Roadways.

Mr. Gluck is managing director of M. and S. Mr. Kirby said there was little control of foreign drivers, and he gave an example of wrong collection of a trailer from a Rotterdam park. There were delays, too.

Mr. Scheimann said two drivers would be needed on a through-service vehicle, so costs must rise. The ease was a "back-door application" and a "dodge that should fail".

Mr. Jackson-Lipkin said the onus was on the objector; there was a prima facie case for M. and S.

Retold Mr. Muir, the LA: "You must consider the general public interest. You decide an application on a balance of probabilities."