No government will ever cut fuel duty, says Tory MP 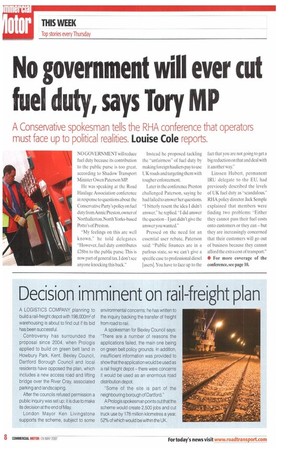 A Conservative spokesman tells the RHA conference that operators must face up to political realities. Louise Cole reports.

NO GOVERNMENT will reduce fuel duty because its contribution to the public purse is too great, according to Shadow Transport Minister Owen Paterson MP.

He was speaking at the Road Haulage Association conference in response to questions about the Conservative Party's policy on fuel duty from Annie Preston.owner of Northallerton,North Yorks-based Potto's of Preston.

"My feelings on this are well known." he told delegates. "However, fuel duty contributes .€28bn to the public purse. This is now part of general tax.! don't see anyone knocking this back." Instead he proposed tackling the "unfairness" of fuel duty by making foreign hauliers pay to use UK roads and targeting them with tougher enforcement.

Later in the conference Preston challenged Paterson, saying he had failed to answer her questions. "1 bitterly resent the idea I didn't answer," he replied. "I did answer the question I just didn't give the answer you wanted.

Pressed on the need for an essential user rebate, Paterson said: -Public finances are in a parlous state, so we can't give a specific case to professional diesel [users]. You have to face up to the fact that you are not going to get a big reduction on that and deal with it another way."

Linssen Hubert, permanent IRU delegate to the EU. had previously described the levels of UK fuel duty as "scandalous." RHA policy director Jack Semple explained that members were finding two problems: "Either they cannot pass their fuel costs onto customers or they can but they are increasingly concerned that their customers will go out of business because they cannot afford the extra cost of transport."

• For more coverage of the conference, see page 10.