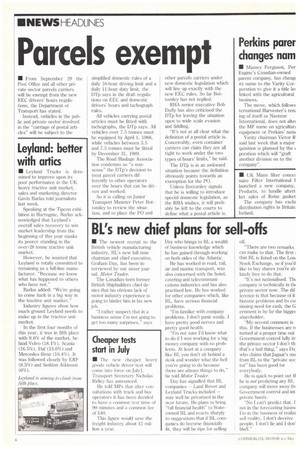 Page 6, 24th May 1986 — Parcels exempt
Close
Noticed an error?
If you've noticed an error in this article please click here to report it so we can fix it.
Keywords : Tachograph

• From September 29 the Post Office and all other private sector parcels carriers will be exempt from the new EEC drivers' hours regulations, the Department of Transport has stated.

Instead, vehicles in the public and private sector involved in the "carriage of postal artides" will be subject to the simplified domestic rules of a daily 10-hour driving limit and a daily 11-hour duty limit, the Dip says in the draft regulations on EEC and domestic drivers' hours and tachograph rules.

The Road Haulage Association condemns as "a nonsense" the DTp's decision to treat parcel carriers differently to other operators over the hours that can be driven and worked.

So it is calling on Junior Transport Minister Peter Bottomley to review the situation, and to place the PO and other parcels carriers under new domestic legislation which will line up exactly with the new EEC rules. So far Bottomley has not replied.

"It's not at all clear what the definition of a postal article is. Conceivably, even container carriers can claim they are all right to work under the two types of hours' limits," he said The DTp is in an awkward situation because the definition obviously points towards an exemption for the PO.

Unless Bottomley signals that he is willing to introduce special domestic legislation, as the RHA wishes, it will probably be left to the courts to define what a postal article is.