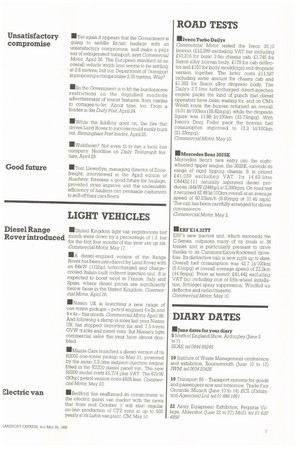 Page 33, 24th May 1986 — ROAD TESTS
Close
Noticed an error?
If you've noticed an error in this article please click here to report it so we can fix it.
Keywords : Off-road Vehicles, Fiat, Iveco, Mercedes-benz, Land Rover Defender, Van

E Yet again it appears that the Government is going to saddle British haulage with an unsatisfactory compromise, and make a pigs ear of refrigerated transport, says Commercial Motor, April 26. The European standard as an overall vehicle width limit seems to be settling at 2.6 metres, but our Department of Transport is proposing a compromise 2.55 metres. Why?

E S° the Government is to lift the burdensome restrictions on the dignified roadside advertisement of tourist features, from castles to cottages-to-let. About time, too. From a leader in the Da fly Post, April 24.

IIWhile the fiddling goes on, the fire that drives Land Rover to success could easily burn out. Birmingham Post leader, April 25.

E Tom Llewellyn, managing director of Econfreight, interviewed in the April edition of Roadway, foresees a good future for haulage, provided rates improve and the undeniable efficiency of hauliers can persuade customers to sell off their own fleets. ▪ Iveco Turbo Dailys Commercial Motor tested the lveco 35.10 boxvan (£12,289 excluding VAT but including £10,215 for basic 3.6m chassis cab, £1,745 for Saxon alloy boxvan body, £179 for cab deflector and £150 for body mouldings) and dropside version together. The latter costs £11,597 including same amount for chassis cab and £1,382 for Saxon alloy dropside body. The Daily's 2.5-litre turbocharged direct-injection engine packs the kind of punch that diesel operators have been waiting for, and on CM's Welsh route the boxvan returned an overall 15.01 lit/100km (18.82mpg), while the dropside figure was 11.88 lit/100km (23.73mpg). With Iveco's Drag Foiler pack the boxvan fuel consumption improved to 13.3 lit/100km (21.23mpg).