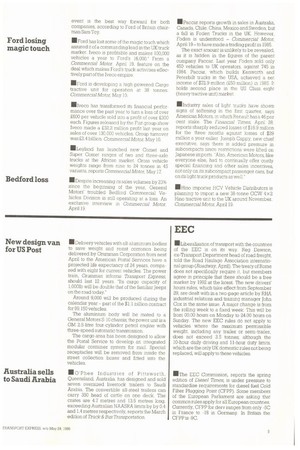 event is the best way forward for both companies, according to Ford of Britain chairman Sam Toy.

• Ford has lost some of the magic touch which assured it of a commanding lead in the UK truck market. Iveco is profitable and makes 100,000 vehicles a year to Ford's 16,000." From a Commercial Motor, April 19, feature on the deal which makes Ford's truck activities effectively part of the Iveco empire.

'Lord is developing a high-powered Cargo tractive unit for operation at 38 tonnes. Commercial Motor, May 10.

• Iveco has transformed its financial performance over the past year to turn a loss of over £600 per vehicle sold into a profit of over £300 each. Figures released by the Fiat group show Iveco made a £32.2 million profit last year on sales of over 130,000 vehicles. Group turnover was £2.4 billion, Commercial Motor, May 10.

• Leyland has launched new Comet and Super Comet ranges of two and three-axle trucks at the African market. Gross vehicle weights range from nine to 24 tonnes in 45 variants, reports Commercial Motor, May 17.

IlDespite increasing its sales volumes by 23% since the beginning of the year, General Motors' troubled Bedford Commercial Vehicles Division is still operating at a loss. An exclusive interview in Commercial Motor. April 19. • Paccar reports growth in sales in Australia, Canada, Chile, China, Mexico and Sweden, but a fall in Foden Trucks in the UK, However, Foden is understood Commercial Motor, April 19-to have made a trading profit in 1985.

The exact amount is unlikely to be revealed, as it is hidden in the figures of the parent company Paccar. Last year Foden sold only 450 vehicles to UK operators, against 745 in 1984. Paccar, which builds Kenworth and Peterbilt trucks in the USA, achieved a net income of $72.9 million (£50 million) in 1985. It holds second place in the US Class eight (heavy tractive unit) market, IlIndustry sales of light trucks have shown signs of softening in the first quarter, says American Motors, in which Renault has a 46 per cent stake, The Financial Times, April 28, reports sharply reduced losses of $18.9 million for the three months against losses of $29 million a year ealier. Joseph Cappy, new chief executive, says there is added pressure in subcompacts since restrictions were lifted on Japanese imports. "Also, American Motors, like everyone else, had to continually offer costly special financing and other sales incentives, not only on its subcompact passenger cars, but on its light truck products as well.'' "'kin° importer HCV Vehicle Distributors is planning to import a new 38-tonne GCW 4 x 2 Hino tractive unit to the UK around November, Commercial Motor, April 19.