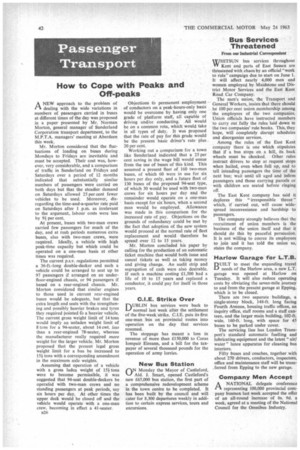 Page 44, 24th May 1963 — Bus Services Threatened
Close
Noticed an error?
If you've noticed an error in this article please click here to report it so we can fix it.

From our Industrial Correspondent WHITSUN bus services throughout VY Kent and parts of East Sussex are threatened with chaos by an official "work to rule" campaign due to start on June 1. It will affect nearly 4,000 men and women employed by Maidstone and District Motor Services and the East Kent Road Car Company.

The men's union, the Transport and General Workers, insists that there should be 100 per cent union membership among the employees of the two companies. Union officials have instructed members to carry out fully the rules laid down in the two companies' rule books. This, they hope, will completely disrupt schedules and disorganize services.

Among the rules of the East Kent company there is one which stipulates that if a bus stops on a hill, its back wheels must be chocked. Other rules instruct drivers to stop at request stops when hailed, even when full up, and to tell intending passengers the time of the next bus; wait until all aged and infirm passengers and those carrying parcels or with children are seated before ringing off.

The East Kent company has said it deplores this "irresponsible threat" which, if carried out, will cause widespread inconvenience and hardship to passengers.

The company strongly believes that the recruitment of union members is the business of the union itself and that it should do this by peaceful persuasion. It is not willing to coerce its employees to join and it has told the union so, states the company.

Harlow Garage for L.T.B. BUILT to meet the expanding travel needs of the Harlow area, a new L.T. garage was opened at Harlow on Tuesday. It will also reduce operating costs by obviating the seven-mile journey to and from the present garage at Epping, which is to be closed.

There are two separate buildings, a single-storey block, 148-ft. long facing Fourth Avenue, housing traffic offices, an inquiry office, staff rooms and a staff canteen, and the larger main building, 102-ft. wide, 160-ft. long, with space for 45 buses to be parked under cover.

Fifty buses and coaches, together with about 270 drivers, conductors, inspectors, office and maintenance staff will be trans, ferred from Epping to the new garage.

Company Men Accept A NATIONAL delegate conference rt representing 100,000 provincial company busmen last week accepted the offer of an all-round increase of 8s. 9d. a week, agreed at a meeting of the National Council for the Omnibus Industry.