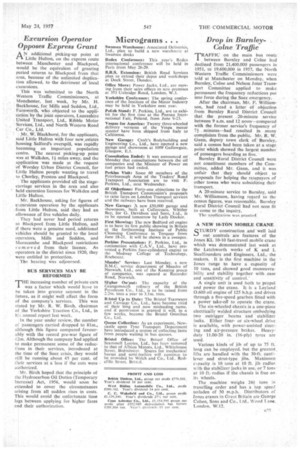 Page 61, 24th May 1957 — Drop in Burn leyCome Traffic T RAFFIC on the main bus
Close
Noticed an error?
If you've noticed an error in this article please click here to report it so we can fix it.
Keywords : Lancashire, Cranes, Local Government In England, Burnley, Geography Of England, Jib

route between Burnley and Comm had declined from 21,400,000 passengers in 1951, to 19.600,000 in 1957, the North Western Traffic Commissioners were told at Manchester on Monday, when Burnley, Colne and Nelson Joint Transport Committee applied to make permanent the frequency reductions put into force during the Suez emergency.

After the chairman, Mr. F. Williamson, had read a letter of objection from Burnley Rural District Council that the present 20-minute service between 9 a.m. and 12 noon—compared with the former service's frequency of 7+ minutes—had resulted in many complaints from the public. Mr. R. W. Gann, deputy town clerk of Burnley, said a census had been taken at a stage point which showed the largest number of passengers boarding as five.

Burnley Rural District Council were not constituent members of the Committee, added Mr. Gann, and it was unfair that they should object to proposals for helping the ratepayers of other towns who were subsidizing their transport.

A 20-minute service to Burnley, said Mr. Williamson, having regard to the census figures, was reasonable. Burnley Rural District Council bad not seen fit to come to the inquiry.

The application was mined.

QTURDY construction and well laid out controls are features of the Jones KL 10-10 fast-travel mobile crane which was demonstrated last week at• the Letchworth works of K and L Steelfounders and Engineers, Ltd., the makers. It is the first machine in the Jones range to have a capacity of 10 tons, and showed good manceuvrability and stability together with ease and sensitivity of control.'

A single unit is used both to propel and power the crane. It is a Leyland 0.600 oil engine of 125 b.h.p. and drives through a five-speed gearbox fitted with a power take-off to operate the crane.

Various kinds of jib of up to 75 ft. long can be employed, but the greatest lifts are handled with the 30-ft. cantilever and strut-type jibs. Maximum capacity is 10 tons at 10 ft. jib radius with the stabilizer jacks in use, or 7 tons at 10 ft.. radius if the chassis is free on its wheels,

The machine weighs 244 tons in travelling order and has a top speed unladen of 30 m.p.h. Distributors of Jones cranes in Great Britain are George Cohen, Sons and Co., Ltd.. Wood Lane. London. W.12.