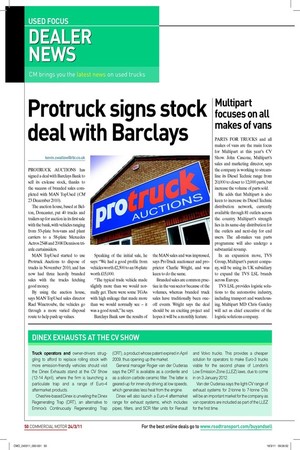 kevin.swallow@rbi.co.uk PROTRUCK AUCTIONS has signed a deal with Barclays Bank to sell its ex-lease stock, thanks to the success of branded sales completed with MAN TopUsed (CM 23 December 2010).

The auction house, based at Belton, Doncaster, put 40 trucks and trailers up for auction in its irst sale with the bank, with vehicles ranging from 53-plate box-vans and plant carriers to a 58-plate Mercedes Actros 2548 and 2008 Dennison triaxle curtainsiders.

MAN TopUsed started to use Protruck Auctions to dispose of trucks in November 2010, and has now had three heavily branded sales with the trucks fetching good money.

By using the auction house, says MAN TopUsed sales director Rael Winetroube, the vehicles go through a more varied disposal route to help push up values. Speaking of the initial sale, he says: “We had a good proile from vehicles worth £2,500 to an 06-plate worth £15,000.

Barclays Bank saw the results of the MAN sales and was impressed, says ProTruck auctioneer and proprietor Charlie Wright, and was keen to do the same.

Branded sales are common practice in the van sector because of the volumes, whereas branded truck sales have traditionally been oneoff events. Wright says the deal should be an exciting project and hopes it will be a monthly feature.