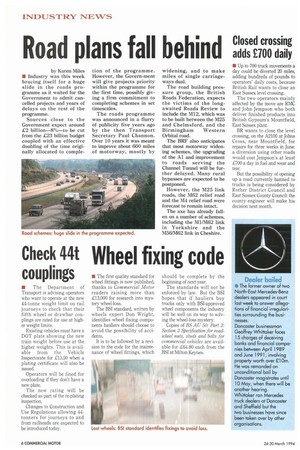 Page 10, 24th March 1994 — adds £100 daily
Close
Noticed an error?
If you've noticed an error in this article please click here to report it so we can fix it.
Keywords : Non-metropolitan Counties, Rother, Mountfield, Sussex, A2100, Hastings, Transport In East Sussex, A2100 Road

• Up to 700 truck movements a day could be diverted 20 miles, adding hundreds of pounds to operators' daily costs, because British Rail wants to close an East Sussex level crossing.

The two operators mainly affected by the move are RMC and John Jempson who both deliver finished products into British Gypsum's Mountfield, East Sussex plant.

BR wants to close the level crossing, on the A2100 at Johns Cross, near Mountfield, for repairs for three weeks in June: a diversion using other roads would cost Jempson's at least £700 a day in fuel and wear and tear.

But the possibility of opening up a road currently banned to trucks is being considered by Rather District Council and East Sussex County Council: the county engineer will make his decision next month,