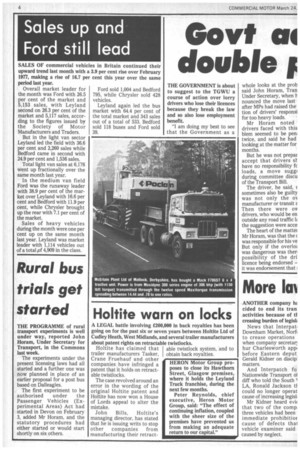 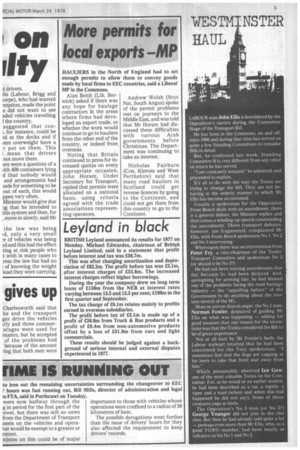 Page 6, 24th March 1978 — Govt double
Close
Noticed an error?
If you've noticed an error in this article please click here to report it so we can fix it.
Keywords : Truck Driver, John Horam, Environment

THE GOVERNMENT is about to suggest to the TGWU a course of action over lorry drivers who lose their licences because they break the law and so also lose employment benefit.

"I am doing my best to see that the Government as a whole looks at the prob said John Horam, Tran Under Secretary, when nounced the move last after MPs had raised the tion of drivers' responsi for too heavy loads.

Mr Horam noted drivers faced with this blem seemed to be pen; twice, and said he had looking at the matter for months.

But he was not prepar accept that drivers st have no responsibility fc Loads, a move suggo during committee discu of the Transport Bill.

The driver, he said, r sometimes also be guilty was not only the or manufacturer or transit e Then there were ov drivers, who would be en outside any road traffic 11 the suggestion were acce The heart of the matter Mr Horam, was that the was responsible for his ye But only if the overlo■ was dangerous was ther possibility of the dri licence being endorsed — it was endorsement that ; d drivers.

Ilis (Labour, Brigg and iorpe), Who had wanted .mption, made the point e did not want to see aded vehicles travelling I the country.

suggested that con for instance, could be a.c1 at the docks and if 7ere overweight have a r put on them. This mean that drivers not move them.

ere were a question of a nth 400 containers lying d that nobody would and arrangements had lade for something to be out of each, this would ppen very often.

Minister would give due lg that he intended to this system and then, for , move in slowly, said Mr the law was being !d, only a very small of vehicles was being ad and this had the effect ting at risk people who t wish in many cases to ,ress the law but had no ; of knowing the weight load they were carrying.