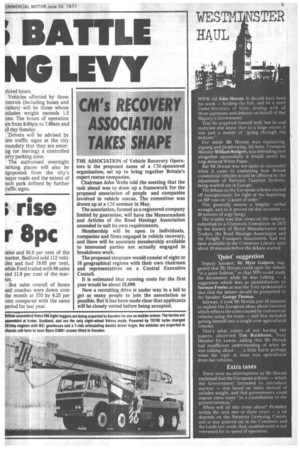 Page 7, 24th June 1977 — WESTM NSTER HAUL
Close
Noticed an error?
If you've noticed an error in this article please click here to report it so we can fix it.
Keywords : Wealden, John Horam, Westminster System, Horam, Speaker Of The British House Of Commons, Myer Galpern, Politics

' 4tla 14714181 POOR old John Horam. it should have been his week — holding the fort, and he a mere Under-Secretary of State, dealing with all those questions and debates on behalf of Her Majesty's Government.

True he acquitted himself well, but he and everyone else knew that to a large extent it was just a matter of "going through the motions."

For while Mr Horam was explaining arguing and prophesying, his boss, Transport Minister William Rodgers, was defending (not altogether successfully it would seem) his long-delayed White Paper.

But Mr Horam was not quite so successful when it came to explaining how British commercial vehicles would be affected by the adjustment of National Taxation Systems, being worked out in Europe.

The debate on the European scheme started off inauspiciously, for right at the beginning an MP rose on "a point of order."

This generally means a lengthy verbal wrangle, and so it proved on this occasion — 20 minutes of argy-bargy.

The trouble was that views on the subject, submitted to a Commons Committee in 1975 by the Society of Motor Manufacturers and Traders, the Road Haulage Association and the Freight Transport Association, had not been available in the Commons Library until about 10 minutes before the debate started.

Deputy Speaker, Sir Myer Galpern, suggested that Mr Horam could open the debate -in a quiet fashion," so that MPs could study the documents while he was talking — a suggestion which was as unsatisfactory to Norman Fowler as was the Tory spokesman's idea that the debate should be postponed to the Speaker, George Thomas.

Anyway, it took Mr Horam just 19 minutes to explain the European ideas about taxation which reflects the costs caused by commercial vehicles using the roads — and that included getting himself into a tangle over agricultural vehicles.

That's what comes of not having the papers, observed Tim Rathbone, Tory Member for Lewes, adding that Mr Horam had insufficient understanding of what he was talking about . . . a little harsh perhaps when the topic at issue was agricultural draw-bar vehicles.

There were no interruptions as Mr Horam explained that the European scheme — which the Government intended to introduce anyway — was based on laden instead of unladen weight, and that governments could impose extra taxes "as a contribution to the general revenue."

When will all this come about? Probably within the next two or three years — a lot depends on the Swansea Licensing Centre, and as was pointed out in the Commons and the Lords last week, that establishment is not renowned for its speed of operation.