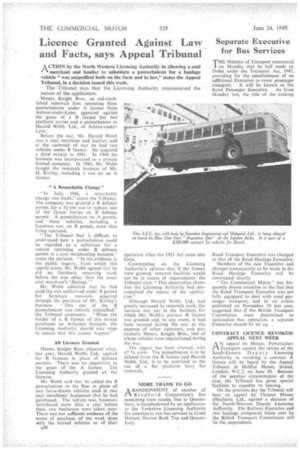 A CTION by the North Western Licensing Authority in allowing a coal " merchant and haulier" to substitute a pantechnicon for it haulage vehicle "was unjustified both on the facts and in law," states the Appeal Tribunal, in a decision issued this week.

The Tribunal says that the Licensing Authority nature of the application.

Messrs. Knight Bros., an old-established re.movaLs firm operating three pantechnicons under A licence from Ashton-under-Lyne, appealed against the grant of a B licence for two platform lorries and a pantechnkon to Harold Webb, Ltd., of Ashton-underLyne.

Before the war, Mr. Harold Webb was a coal merchant and haulier, and at the outbreak of war he had two vehicles under B licence. He acquired a third vehicle in .1941. in 1944 his business was incorporated as a private limited company. In 1943, Mr. Webb bought the removals business of Mr. H. Kirtley, including a van on an A licence.

" In July, 1946, a remarkable change was made," states the Tribunal. The company was granted a B defence permit for a 31-ton van to replace one of the 21--ton lorries on B defence permit. A pantechnicon on A permit, and three vehicles, including a furniture van, on B permit, were then being operated,

"The Tribunal find it difficult to understand how a pantechnicon could be regarded as • a substitute for a. vehicle operating under B defence permit in a coal merchanting business,"

states the decision. In his evidence at the public inquiry, from which this appeal arises, Mr. Webb agreed that he did no furniture removing work before the war other than the usual coal merchant's flittings.' " nr. Webb admitted that he had used the van authorized under B permit for furniture removals acquired through the purchase of Mr. Kirtley's business. This use of the B pantechnicon was entirely unjustified," the Tribunal comments. "When the holder of a B licence of this nature purchases an A-licence business, the Licensing AuthoritY should take steps to ensure that this cannot happen."

Messrs. Knight Bros. objected when, Iast year, Harold Webb, Ltd., applied for B licences in place of defence permits. There was no opposition to the grant of the A licence. The Licensing Authority granted all the licences.

Mr. Webb said that he added the B pantechnicon to his fleet in place of two horse-drawn vehicles used in two coal merchants' businesses that he had purchased. The vehicle was, however, introduced more than a year before these two businesses were taken over. There was not sufficient evidence of the terms of purchase, of the work done with the horsed vehicles or of their

Although Harold Webb, Ltd., had greatly increased its removals work, the increase was not in the business for which Mr. Webb's pre-war B licence was granted and, in any event, it had. been secured during the war at the expense of other operators, and particularly Messrs. Knight Bros., two of whose vehicles were requisitioned during the war.

The appeal has been allowed, with £7 7s. costs. The pantechnicon is' to.be deleted from the B licence and Harold Webb, 'Ltd., is to be restricted to the use of a flat platform lorry for removals.

A BANDONMENT of another of tt Bradford Corporation's few remaining tram routes, that to Queens bury, is foreshadowed by an application to the Yorkshire Licensing Authority for sanction to run bus services to Great Horton, Horton Bank Top and Queensbury.

THE Minister of Transport announced • on Monday that he hall made an Order under the Transport Act, 1947, providing for the establishment of an additional Executive to cover passenger transport. It will be known as the Road Passenger Executive. As from Monday last, the title of the existing Road Transport Executive was changed to that of the Road Haulage Executive.

"The Commercial Motor" has frequently drawn attention to the fact that the Road Transport Executive was not fully equipped to deal with road passenger transport, and in an article published on November 19 last year, suggested that if the. British Transport Commission were determined to nationalize bus operation, a separate Executive' should be set up.

ANappeal by Messrs. Powerscourt Transport against the action of the South-Eastern Deputy Licensing Authority in revoking a contract A licence will be heard by the Appeal Tribunal at Halifax House, Strand, London, W.C.2, on June 30. Because of the peculiar circumstances of the case, the Tribunal has given special facilities to expedite its hearing.

On the previous day the Tribunal will hear an appeal by Thomas Mason (Hauliers), Ltd., against a decision of the North-Western Deputy Licensing AuThority. The Railway Executive and two haulage companies taken over by the British Transport Commission will he the respondents.