Ham Wharfage—Enough but Not Too Many 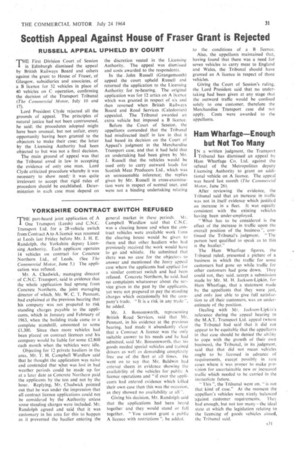 Page 33, 24th July 1964 — Ham Wharfage—Enough but Not Too Many
Close
Noticed an error?
If you've noticed an error in this article please click here to report it so we can fix it.
Keywords : Court Systems, Tribunal, Appeal, Law / Crime, Business / Finance

IN a written judgment, the Transport Tribunal has dismissed an appeal by Ham Wharfage Co. Ltd. against the refusal of the Metropolitan deputy Licensing Authority to grant an additional vehicle on .A licence. The appeal was heard last month (The Commercial Motor, June 26).

After reviewing the evidence, the Tribunal said that an increase in traffic was not in itself evidence' which justified an increase in a fleet. It was equally consistent with the existing vehicles having been under-employed.

" What has to be considered is the effect of the increase in traffic upon the overall position of the business", continued the Tribunal's judgment. "The person best qualified to speak as to this is the haulier."

The Ham Wharfage figures. the Tribunal ruled, presented a picture of a business in which the traffic for some customers had gone up while traffic for other customers had gone down. They could not, they said, accept a submission made by Mr. M. 1-1. Jackson-Lipkin. for Ham Wharfage, that a statement made by the appellants that they were just, and only just able to give full satisfaction to all their customers, was an underestimate of the position.

Dealing with Mr. Jack son-Lipk n's reference during the appeal hearing to the M.A.T. Transport Ltd. appeal (where the Tribunal had said that it did not appear to be equitable that the appellants in that case should be denied the ability to cope with the growth of their own business), the Tribunal, in its judgment, said that that did not mean vehicles ought to he licensed in advance of requirements, except possibly in are cases where it was proper to make provision for ascertainable new or increased traffic which needed to be carried in the immediate future.

This ", the Tribunal went on. " is not that kind of.case." At the moment the appellant's vehicles were nicely balanced -against customer requirements. They had enough, but not too many—the ideal state at which the legislation relating to the licensing of goods vehicles aimed, the Tribunal said.