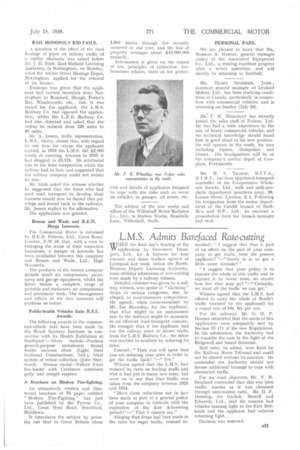 A question of the effect of the road haulage of pipes on railway traffic of a similar character was raised before Mr. J. H. Stirk, East Midland Licensing Authority, in Nottingham, on Monday, when the Archer Street Haulage Depot, Nottingham, applied for the renewal its licence.

Evidence was given that the applicant had carried materials from Nottingham to Roinford, Slough, Potter's Bar, Wandsworth, etc., hut, it was stated for the applicant, the L.M.S. Railway Co. had opposed the application, whilst the L.N.E. Railway Co. hat also objected and asked that the radius be reduced from 120 miles to 40 miles.

Mr. A. Jesson, traffic representative, L.M.S., Derby, stated that, with regard to one firm for whom the applicant carried, in 1932 the L.M.S. did £2,805 worth of carrying, whereas in 1935 it had dropped to £1,118. He attributed this to the keen competition which the railway had to face, and suggested that the railway company could not reduce its rate.

Mr. Stirk asked the witness whether he suggested that the firms who had used road transport to develop their business should now be denied that privilege and forced back to the railways. Mr. Jesson replied in the affirmative.

The Commercial Motor is informed by B.E.N. Patents, Ltd., Gorst Road, London, N.W.10, that, with a view to enlarging the scope of their respective businesses, a merger of interests has been concluded between this company and Broom and Wade, Ltd., High Wycombe.

The products of the former company include small air compressors, paintspray arid gar ige equipment, whilst the latter .makes a complete range of portable and stationary air compressors and pneumatic tools. The management and affairs of the two concerns will continue as before.

A Brochure on Modern Fire-fighting.

It introduces the subject by pointing out that in Great Britain alone 1,608 deaths through fire recently occurred in one year, and the loss of property averages about £10,000,000 annually.

Information is given on the causes of fire, principles of extinction, fireinsurance rebates, hints on fire protec tion and details of appliances designed to cope with fire risks such as occur on vehicles, in garages, oil stores, etc.

We are pleased to learn that MR. NoRmAN A. 1-1nRorE, general 'manager (sales) of the Associated Equipment Co., Ltd., is making excellent progress after a minor operation, and will shortly be returning to Southall.

Ms. HENRY SPURRIER, assistant general manager of Leyland Motors, _Ltd., has been studying conditions in Canada, particularly in connection with commercial vehicles, and is returning on Sunday (July 26).

• MR 7 F. K. WHEATLEY has recently joined the sales staff of ' Fodens, Ltd. He has: had a 'wide experience in the sale of heavy commercial vehicles, and his technical knowledge should stand him in good stead in his new position. lie will operate in the south, his area including Sussex, Hampshire and Dorset. His headquarters will be at the company's service depot at Cowplain, Portsmouth.

Me. M. I. THOMAS, M. ,T.A., M.I.M.T., has heen appointed transport controller of the Co-operative Wholesale Society, Ltd., milk and milk-products department (southern area), 99, Leman Street, London, E,1. Following his resignation from the motor department of the Cardiff branch of ShellMex and B,P., Ltd., he received a presentation from the branch manager and staff.