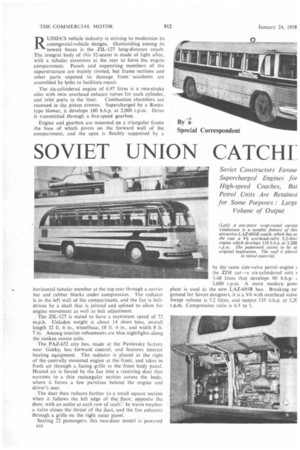 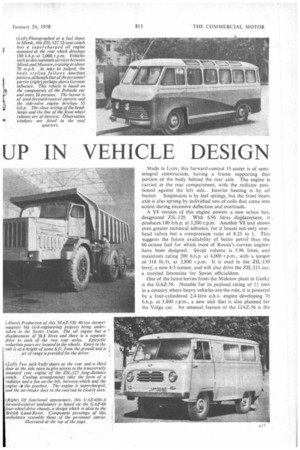 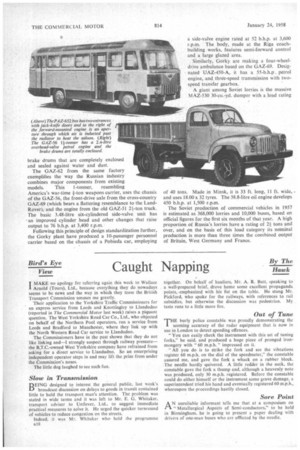 Page 50, 24th January 1958 — SOVIET UNION CATCH' UP IN VEHICLE DESIGN
Close
Noticed an error?
If you've noticed an error in this article please click here to report it so we can fix it.

Soviet Constructors Favour Supercharged Engines for High-speed Coaches, But Petrol Units Are Retainea for Some Purposes : Large Volume of Output

RUSSIA'S vehicle industry is striving to modernize its comniercial-vehicle designs. Outstanding among its newest buses is the Z1L-127 long-distance coach. The integral body of this 32-seater is made of light alloy, with a tubular extension at the rear to form the engine compartment. Panels and supporting members of the superstructure are mainly riveted, but frame sections and other parts exposed to damage from accidents are assembled by bolts to facilitate repair.

The six-cylindered engine of 6.97 litres is a two-stroke oiler with twin overhead exhaust valves for each cylinder, and inlet ports in the liner. Combustion chambers are recessed in the piston crowns. Supercharged by a Rootstype blower, it develops 180 b.h.p. at 2,000 r.p.m. Drive is transmitted through a five-speed gearbox.

Engine and gearbox are mounted on a triangular frame the base of which pivots on the forward wall of the compartment, and the apex is flexibly supported by a

horizontal tubular member at the top rear through a carrier bar and rubber blocks under compression. The radiator is in the left wall of the compartment, and the fan is beltdriven by a shaft that is jointed and splined to allow for engine movement as well as belt adjustment.

The PAZ-652 city bus, made at the Pavlovsky factory near Gorky, has forward control, and features interior heating equipment. The radiator is placed at the right of the centrally mounted engine at the front, and takes in fresh air through a facing grille in the front body panel. Heated air is forced by the fan into a receiving duct that narrows to a thin rectangular section across the body, where it forms a low partition behind the engine and driver's seat.

The duct then reduces further to a small square section when it follows the left edge of the floor, opposite the door, with an outlet at each row of seats. In warm weather a valve closes the throat of the duet, and the fan exhausts through a grille on the right outer panel.

by the same side-valve petrol engine E the ZIM car—a six-cylindered unit 4 3.48 litres that develops 90 b.h.p. g 3,600 r.p.m. A more modern powi plant is used in the new LAZ-695B bus. Breaking ne' ground for Soviet designers, it is a V6 with overhead valve Swept volume is 5.2 litres, and output 135 b.h.p. at 3,2( r.p.m. Compression ratio is 6.5 to 1. Made in Lvov, this forward-control 33-seater is of semiintegral construction, having a frame supporting that portion of the body behind the rear axle. The engine is carried in the rear compartment, with the radiator positioned against the left side. Interior heating is by oil burner_ Suspension is by leaf springs, but the front beam axle is also sprung by individual sets of coils that come into

action during excessive deflection and overloads. ,

One of the latest lorries from the Molotov plant in Gorky is the GAZ-56. Notable for its payload rating of it tons in a country where heavy vehicles are the rule, it is powered by a four-cylindered 2.4-litre o.h.v. engine developing 70 b.h.p. at 3,400 r:p.m., a new unit that is also planned for the Volga car. An unusual feature of the GAZ-56 is the brake drums that are completely enclosed and sealed against water and dust.

The GAZ-62 from the same factory exemplifies the way the Russian industry combines major components from existing models. This 1-tonner, resembling America's war-time 1-ton weapons carrier, uses the chassis of the GAZ-56, the front-drive axle from the cross-country GAZ-69 (which bears a flattering resemblance to the LandRover); and the engine from the old GAZ-51 24-ton truck. The basic 3.48-litre six-cylindered side-valve unit has an improved cylinder head and other changes that raise output to 76 b.h.p. at 3,400 r.p.m.

Following this principle of design standardization further, the Gorky plant have produced a 10-passenger personnel carrier based on the chassis of a Pobieda car, employing • a side-valve engine rated at 52 b.h.p. at 3,600 r.p.m. The body, made at the Riga coachbuilding works, features semi-forward control and a large glazed area.

Similarly, Gorky are making a four-wheeldrive ambulance based on the GAZ-69. Designated UAZ-450-A, it has a 55-b.h.p. petrol engine, and three-speed transmission with twospeed transfer gearbox.

The Soviet production of commercial vehicles in 1957 is estimated as 368,000 lorries and 10,000 buses, based on official figures for the first six months of that year. A high proportion of Russia's lorries have a rating of 24 tons and over, and on the basis of this load category its nominal production is more than three times the combined output of Britain, West Germany and France.