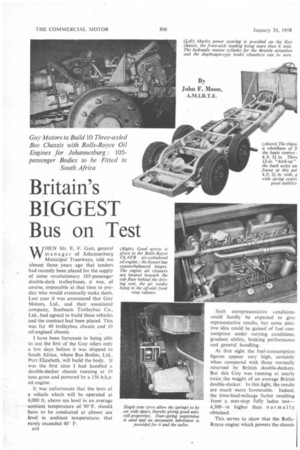 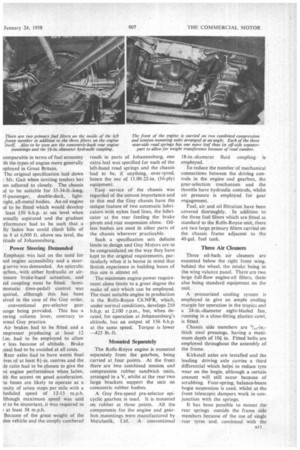 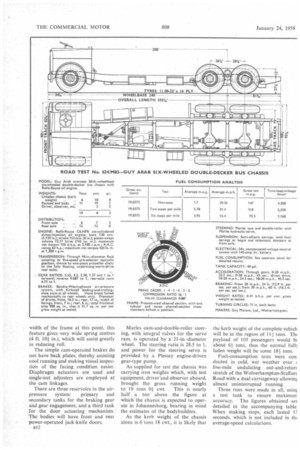 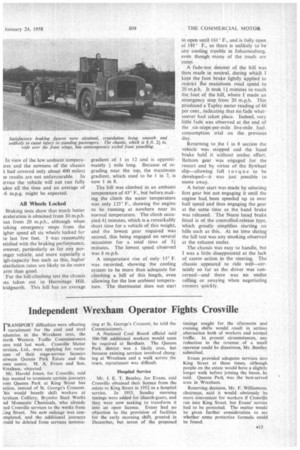 WHEN Mr. E. F. Gait, general man ager of Johannesburg Municipal Tramways, told me almost three years ago that tenders had recently been placed for the supply of some revolutionary 105-passenger double-deck trolleybuses, it was, of course, impossible at that time to predict who would eventually make them. Last year it was announced that Guy Motors, Ltd., and their associated company, Sunbeam Trolleybus Co., Ltd., had agreed to build these vehicles and the contract had been placed. This was for 40 trolleybus chassis and 10 oil-engined chassis.

I have been fortunate in being able to test the first of the Guy oilers only a few days before it was shipped to South Africa, where Bus Bodies, Ltd., Port Elizabeth, will build the body. It was the first time I had handled a double-decker chassis running at 19 tons gross and powered by a 156 b.h.p. oil engine.

10 Such unrepresentative conditions could hardly be expected to give representative results, but some positive idea could be gained of fuel consumption under varying conditions, gradient ability, braking performance and general handling.

At first sight the fuel-consumption figures appear very high, certainly when compared with those normally returned by British double-deckers. But this Guy was running at nearly twice the weight of an average British double-decker. In this light, the results are much more favourable. Indeed, the time-load-mileage factor resulting from a non-stop fully laden test4,300—is higher than normally obtained.

This serves to show that the RollsRoyce engine which powers the chassis comparable in terms of fuel economy th the types of engine more generally aployed in Great Britain.

The original specification laid down r Mr. Gait when inviting tenders has :en adhered to closely. The chassis id. to be suitable for 33-34-ft.-long, 15-passenger, double-deck, fight:ight, all-metal bodies. An oil engine id to be fitted which would develop least 150 b.h.p. at sea level when rmally aspirated and the gradient :rformance had to be such that a fly laden bus could climb hills of in 8 at 6,000 ft. above sea level, the titude of Johannesburg.

Emphasis was laid on the need for )od engine accessibility and a steerg servo was demanded. An epicyclic :arbox, with either hydraulic or airessure brake-band actuation, and lid coupling must be fitted. Semiitomatic (two-pedal) control was quired, although this has been aived in the case of the Guy order, conventional pre-selector gear iange being provided. This has a oering column lever, contrary to )1-mai Guy practice.

Air brakes had to be fitted and a )mpressor producing at least 12 r.m. had to be employed to allow T loss because of altitude. Brake [neat had to be avoided at all costs. Rear axles had to have worm final +yes of at least 84-in. centres and the de ratio had to be chosen to give the :st engine performance when laden, ith the accent on good acceleration. ie buses are likely to operate at a !nsity of seven stops per mile with a heduled speed of 12-13 m.p.h. lthough maximum speed was said )t to be important, it was required to at least 38 m.p.h.

Because of the great weight of the den vehicle and the steeply cambered roads in parts of Johannesburg, one extra leaf was specified for each of the left-hand road springs and the chassis had to be, if anything, over-tyred, hence the use of 11.00-22-in. (16-ply) equipment.

Easy service of the chassis was regarded of the utmost importance and to this end the Guy chassis have the unique feature of two automatic lubricators with nylon feed lines, the lubricator at the rear feeding the brake pivots and rear suspension alone. Oilless bushes are used in other parts of the chassis wherever practicable.

Such a specification sets definite limits to design and Guy Motors are to be congratulated on the way they have kept to the original requirements, particularly when it is borne in mind that British experience in building buses of this size is almost nil.

The minimum engine-power requirement alone limits to a great degree the make of unit which can be employed. The most suitable engine in production is the Rolls-Royce C6.NFR, which, under normal conditions, develops 210 b.h.p. at 2,100 r.p.m., but, when derated, for operation at Johannesburg's altitude, has an output of 156 b.h.p. at the same speed. Torque is lower .-425 lb.-ft.

The Rolls-Royce engine is mounted separately from the gearbox, being carried at four points. At the front there are two combined tension and compression rubber sandwich units, arranged in a V, whilst at the rear two large brackets support the unit on concentric rubber bushes.

A Guy five-speed pre-selector epicyclic gearbox is used. It is mounted on rubber at three points. All the components for the engine and gearbox mountings were manufactured by Metalastik, f.td. A conventional 18-in.-diameter fluid coupling is employed.

To reduce the number of mechanical connections between the driving controls in the engine and gearbox, the gear-selection mechanism and the throttle have hydraulic controls, whilst air pressure is employed for gear engagement.

Fuel, air. and oil filtration have been covered thoroughly. In addition to the three fuel filters which are fitted as standard to the Rolls-Royce unit, there are two large primary filters carried on the chassis frame adjacent to the 40-gal, fuel tank.

Three Air Cleaners Three oil-bath air cleaners are mounted below the right front wing, behind the wheel, the intake being in the wing valance panel. There are two large full-flow engine-oil filters, these also being standard equipment on the unit.

A pressurized cooling system is employed to give an ample cooling margin for operation in the tropics and a 24-in.-diameter eight-bladed fan, running in a close-fitting plastics cowl, is fitted.

Chassis side members are thick steel pressings, having a maximum depth of l0 in. Fitted bolts are employed throughout the assembly of the frame.

Kirkstall axles are installed and the leading driving axle carries a third differential which help i to reduce tyre wear on the bogie, although a certain amount will still occur because of scrubbing. Four-spring, balance-beam bogie suspension is used, whilst at the front telescopic dampers work in conjunction with the springs.

It has been possible to mount the rear springs outside the frame side members because of the use of single rear tyres and, combined with the width of the frame at this point, this feature gives very wide spring centres (4 ft. 101 in.), which will assist greatly in reducing roll.

The simple cam-operated brakes do not have back plates, thereby assisting cool running and making visual inspection of the facing condition easier. Diaphragm actuators are used and single-nut adjusters are employed at the cam linkages.

There are three reservoirs in the airpressure system: primary arid secondary tanks for the braking gear and gear engagement, and a third tank for the door actuating mechanism. The bodies will have front and rear power-operated jack-knife doors.

B12 Manes cam-and-double-roller steering, with integral valves for the servo ram, is operated by a 21-in.-diameter wheel. The steering ratio is 28.5 to 1, and power for the steering servo is provided by a Plessey engine-driven gear-type pump.

As supplied for test the chassis was carrying iron weights which, with test equipment, driver and observer aboard, brought the gross running weight to 19 tons 0,1 cwt. This is nearly half a ton above the figure at which the chassis is expected to operate in Johannesburg, bearing in mind the estimates of the bodybuilders.

Three runs were made in all, usim a test tank to ensure maximurr accuracy. The figures obtained art detailed in the accompanying table When making stops, each lasted 1 seconds, which is not included in thi average-speed calculations.

In view of the low ambient temperaal-es and the newness of the chassis t had covered only about 400 miles) ie results are not unfavourable. In trvice the vehicle will not run fully idea all the time and an average of -6 m.p.g. might be expected.

All Wheels Locked Braking tests show that much better eceleration is obtained from 30 m.p.h. Ian from 20 m.p.h., although when laking emergency stops from the igher speed all six wheels locked for le last few feet. U was reasonably atisfied with the braking performance, owever, particularly as for any pasenger vehicle, and more especially a igh-capacity bus such as this, higher etardation rates are likely to do more arm than good.

For the hill-climbing test the chassis as taken out to Hermitage Hill, lridgnorth. This hill has an average

gradient of I in 12 and is approximately 1 mile long. Because of regrading near the top, the maximum gradient, which used to be 1 in 7, is now I in 8.

The hill was climbed in an ambient temperature of 45° F., but before making the climb the water temperature was only 125° F., showing the engine to be running at nowhere near its normal temperature. The climb occupied 41 minutes, which is a remarkably short time for a vehicle of this weight, and the lowest gear required was second, this being engaged on several occasions for a total time of 31 minutes. The lowest speed observed was 8 m.p.h.

A temperature rise of only 15° F. was recorded, showing the cooling system to be more than adequate for climbing a hill of this length, even allowing for the low ambient temperature. The thermostat does not start to open until 161° F., and is fully open at 181° F., so there is unlikely to be.' any cooling trouble in Johannesburg, even though -many of the roads are steep.

A fade-test descent of the hill was then made in neutral, during which 1 kept the foot brake lightly applied to restrict the maximum road speed to 20 m.p.h. It took 11 minutes to reach the foot of the hill, where I made an emergency stop from 20 m.p.h. This produced a Tapley meter reading of 66 per cent., indicating that no fade whatsoever had taken place. Indeed, very little fade was observed at the end of the six-stops-per-mile five-mile fuel consumption trial, on the, previous day.

Returning to the 1 in 8 section the vehicle was stopped and the hand brake held it without undue effort. Bottom gear was engaged for the restart and by virtue of the flywheel slip—allowing full t o rque to be developed—it was just possible to move away.

A better start was made by selecting first gear but not engaging it until the engine had, been speeded up to over half speed and then engaging the gear at the same time as the hand brake was released. The Neate hand brake fitted is of the controlled-release type. which greatly simplifies starting on hills such as this. At no time during the hill test was any smoking observed at the exhaust outlet.

The chassis was easy to handle, but 1 was a little disappointed at the lack of castor action in the steering. The chassis appeared to ride well—certainly so far as the driver was concerned—and there was FLO undue rolling or swaying when negotiating corners quickly.