Cars Increase at Cost of Buses 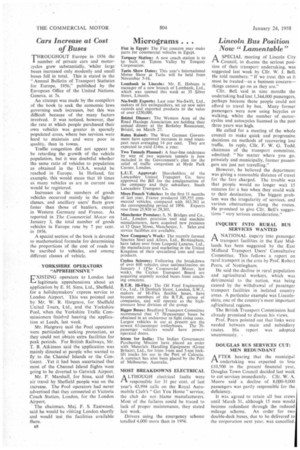 THROUGHOUT Europe in 1956 the number of private cars and motorycles grew substantially, --whilst large buses increased only modestly and small buses fell in total. This is stated in the "Annual Bulletin of Transport Statistics for Europe, 1956," published by the European Office of the United Nations. Geneva, at 7s.

An attempt was made by the compilers of the book to seek the economic laws governing such increases, but this was difficult because of the many factors involved. It was noticed, however, that the rate at which people purchased their own vehicles was greater in sparsely populated areas, where bus services were hard to maintain and were poor in quality, than in towns.

Traffic congestion did not appear to be retarding the growth of the vehicle population, but it was doubtful whether the same ratio of vehicles to population as obtained in the U.S.A. would be reached in Europe. In Holland, for example, this would mean that 10 times as many vehicles as are in current use would be registered.

Increases in the numbers of goods vehicles occurred mainly in the lighter classes, and ancillary users' fleets grew faster than those of hauliers, except in Western Germany and France. As reported in The Commercial Motor on January 3, the total number of goods vehicles in Europe rose by 7 per cent. in 1956.

A special section of the book is devoted to mathematical formulm for determining the proportions of the cost of roads to be ascribed to vehicles, and among different classes of vehicle.

EXISTING operators to London had LA legitimate apprehensions about an application by E. H. Sims, Ltd., Sheffield, for a holidaymakers' express service to London Airport. This was pointed out by Mr. W. R. Hargrave, for Sheffield United Tours, Ltd., and the Yorkshire Pool, when the Yorkshire Traffic Commissioners finished hearing the application at Leeds, last week.

Mr. Hargrave said the Pool operators were particularly seeking protection, as they could not obtain extra facilities for peak periods. For British Railways, Mr. T. B. Atkinson said the application was mainly directed at people who wanted to fly to the Channel Islands or the Continent. .Yet it had been ascertained that most of the Channel Island flights were going to be diverted to Gatwick Airport.

Mr. F. Marshall, for Sims, said that air travel by Sheffield people was on the increase. The Pool operators had never advertised that they connected at Victoria Coach Station, London, for the London Airport.

The chairman, Maj. F. S. Eastwood, said he would be vAiting London shortly and would test. the facilities available there.

LTHOUGH electrical faults were rt responsible for 31 per cent, of last year's 43,994 calls on the Royal Automobile Club's "Get You Home" service, the club do not blame manufacturers. Most of the failures could be traced to lack of proper maintenance, they stated last week.

Drivers using the emergency scheme totalled 4.000 more than in 1956.