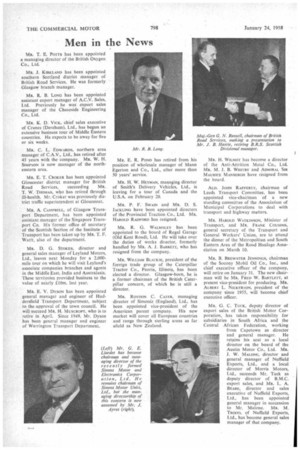 Page 34, 24th January 1958 — Men in the News
Close
Noticed an error?
If you've noticed an error in this article please click here to report it so we can fix it.
Keywords : Superbrands Council, Churchill Machine Tool Company, Business / Finance

MR. T. E. Porrs has been appointed a managing director of the British Oxygen Co., Ltd.

MR. R. B. LONG has been appointed assistant export manager of A.C.V. Sales, Ltd. Previously he was export sales manager of the Chaseside Engineering Co., Ltd.

MR. K. D. Vim chief sales executive of Cranes (Dereham), Ltd., has begun an extensive business tour of Middle Eastern countries. He expects to be away for five or six weeks.

MR. A. CAMPBELL, of Glasgow Transport Department, has been appointed assistant manager of the Singapore Transport Co. His -former office of secretary of the Scottish Section of the Institute of Transport has been taken up by MR. T. F. WATT, also of the department.

MR. D. G. STOKES, director and general sales manager of Leyland Motors, Ltd., leaves next Monday for a 2,000mile tour on which he will visit Leyland's associate companies branches and agents in the Middle East, India and Australasia. These territories provided business to the value of nearly f 10m. last year.

MR. E. V. DYSON has been appointed general manager and engineer of Huddersfield Transport Department, subject to the approval of the town council. He will succeed MR. H. MUSCROFT, who is to retire in April. Since 1949, Mr. Dyson has been general manager and engineer of Warrington Transport Department. MR. E. R. Por,ro has retired from his position of wholesale manager of Mann Egerton and Co., Ltd., after more than 50 years' service.

MR. H. W. HEymarsr, managing director of Smith's Delivery Vehicles, Ltd., is leaving for a tour of Canada and the U.S.A. on February 20.

MR. R. G. WALMSLEY has been appointed to the board of Regal Garage (Old Kent Road), Ltd. He will take over the duties of works director, formerly handled by MR. A_ J. BARRE1T, who has resigned from the company.

MR. WILLIAM BLACKIE, president of the foreign trade group of the Caterpillar Tractor Co., Peoria, Illinois, has been elected a director. Glasgow-born, he is a former chairman of the British Caterpillar concern, of which he is still a director.

MR. ROYDON C. CATER, managing director of Simoniz (England), Ltd., has been appointed vice-president of the American parent company, His new market will cover all European countries and range through sterling areas as far afield as New Zealand. MR. H. Wrimar has become a director of the Anti-Attrition Metal Co., Ltd_ MR. M. J. B. WHITBY and ADMIRAL SIR MAURICE MANSERGH have resigned from the board.

ALD. JOHN RAFFER1Y, chairman of Leeds Transport Committee, has been appointed vice-chairman of a new standing committee of the Association of Municipal Corporations to deal with transport and highway matters.

MR. HAROLD WATKINSON, Minister of Transport, and MR. FRANK COUSINS, general secretary of the Transport and General Workers' Union, are to attend the dinner of the Metropolitan and South Eastern Area of the Road Haulage Association on March 10.