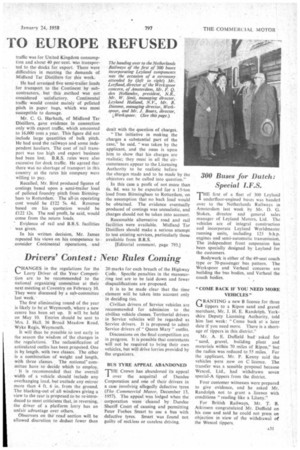 THE first of a fleet of 300 Leyland underfloor-engined buses was handed over to the Netherlands Railways in Amsterdam last week by Mr. D. G. Stokes, director and general sales manager of Leyland Motors, Ltd. The vehicles are of integral construction and incorporate Leyland Worldmaster running units, including 125 b.h.p. engines and semi-automatic transmission. The independent front suspension has been specially designed by Leyland for the customers.

Bodywork is either of the 49-seat coach type or 70-passenger bus pattern. The Werkspoor and Verheul concerns are building the bus bodies, and Verheul the coach bodies.

"COME BACK IF YOU NEED MORE VEHICLES"

GRANTING a new B licence for three tippers to a Ripon sand and gravel merchant, Mr. J. H. E. Randolph, Yorkshire Deputy Licensing Authority, told him last week: "Come back at a later date if you need more. There is a shortage of tippers in this district."

Mr. A. E. Duffield had' asked for "sand, gravel, building plant and materials within 70 miles of Ripon," but the radius was reduced to 55 miles. For the applicant, Mr. P. Kenny said the vehicles were now on C licence. The transfer was a sensible proposal because Wescol, Ltd., had withdrawn seven special-A tippers from the district.

Four customer witnesses were prepared to give evidence, and he asked Mr. Randolph not to grant a licence with conditions "reading like a Litany."

For British Railways, Mr. T. B. Atkinson congratulated Mr. Duffield on his case and said he could not press an objection in view of the withdrawal of the Wescol tippers.