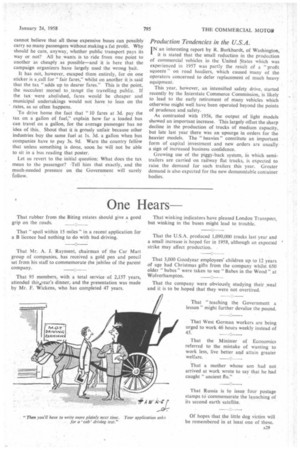 Page 31, 24th January 1958 — One Hears
Close
Noticed an error?
If you've noticed an error in this article please click here to report it so we can fix it.
Keywords : Postage Stamp, Postal System, Stamp Collecting, Goodyear Tire And Rubber Company

That rubber from the Biting estates should give a good grip on the roads.

That "spoil within 15 miles" in a recent application for a B licence had nothing to do with bad driving.

That Mr. A. .1. Rayment, chairman of the Car Mart group of companies, has received a gold pen and pencil set from his staff to commemorate the jubilee of the parent company.

That 95 members, with a total service of 2,157 years, attended this,year's dinner, and the presentation was made by Mr. F. Wickens, who has completed 47 years. That winking indicators have pleased London Transport, but winking in the buses might lead to trouble.

That the U.S.A. produced 1,090,000 trucks last year and a small increase is hoped for in 1958, although an expected ' strike may affect production.

That 3,000 Goodyear employees' children up to 12 years of age had Christmas gifts from the company whilst 650 older " babes " were taken to see "Babes in the Wood " at Wolverhampton.

That the company were obviously. studying their weal and it is to be hoped that they were not overtired.

That "teaching the Government a lesson" might further devalue the pound.

That West German workers are being urged to work 46 hours weekly instead of 45.

That the Minister of Economics referred to the mistake of wanting to work less, live better and attain greater welfare.

That a mother whose son had not arrived at work wrote to say that he had caught "ancient flu."

That Russia is to issue four postage stamps to commemorate the launching of its second earth satellite.

Of hopes that the little dog victim will be remembered in at least one of these.