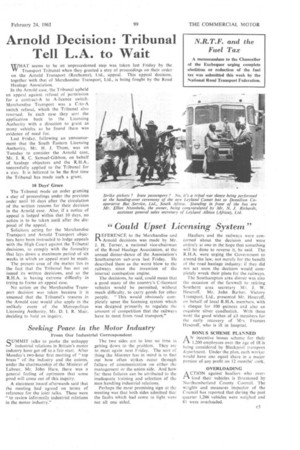 Page 51, 24th February 1961 — Arnold Decision: Tribunal Tell L.A. to Wait
Close
Noticed an error?
If you've noticed an error in this article please click here to report it so we can fix it.

on the Arnold Transport (Rochester), Ltd., appeal. This appeal decision, together with that of Merchandise Transport, Ltd., is being fought by the Road Haulage Association.

In the Arnold case, the Tribunal upheld an appeal against refusal of permission for a contract-A to A-licence switch.. Merchandise Transport was a C-to-A switch refusal, which the Tribunal also reversed. In each case they sent the application hack to• the Licensing Authority with a direction to grant as many vehicles as he found there was evidence of need for.

Last Friday, following an announcement that the South Eastern Licensing Authority, Mr. H.. J. Thom, was on Tuesday to consider the Arnold case, Mr_ J. R. C. Samuel-Gibbon, on behalf of haulage objectors and the R.H.A., successfully applied to the Tribunal for a stay. It is believed to be the first time the Tribunal has made such a grant.

10 Days' Grace The Tribunal made an order granting a stay of proceedings under the previous order until 10 days after the circulation of the written reasons for their decision in the Arnold case. •Also, if a notice of appeal is lodged within that 10 days, no action is to be taken until after the disposal of the appeal.

Solicitors acting for the Merchandise Transport and Arnold Transport objectors have been instructed to lodge appeals with the High Court against the Tribunal decisions, to comply with the formality that lays down a maximum period of six weeks in which an appeal must be made.

The present crux of the matter lies in the fact that the Tribunal has not yet issued its written decisions, and so the R.H.A. is having extreme difficulty in trying to frame an appeal case.

No action on the Merchandise Transport decision was taken because it is assumed that the Tribunal's reasons in the Arnold case would also apply in the unlikely event of the Metropolitan Licensing Authority, Mr. D. I. R. Muir, deciding to hold an inquiry.