Light Vans with Park Royal Bodies for the Post Office. 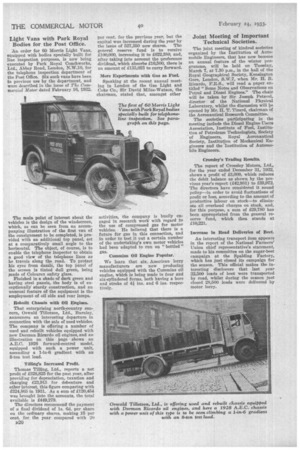 Page 34, 24th February 1933 — Light Vans with Park Royal Bodies for the Post Office.
Close
Noticed an error?
If you've noticed an error in this article please click here to report it so we can fix it.
Keywords : Crossley, Rolls-royce, Institution Of Mechanical Engineers, Diesel Engine, Internal Combustion Engine, Business / Finance

Au. order for 60 Morris Light Vans, equipped with bodies specially built for line inspection purposes, is now being executed by Park Royal Coachworks, Ltd.; Abbey Road, London, N.W.10, for the telephone inspection department of the Post Office. Six such vans have been in previous use by the department, and were described in the issue of The Commercial Motor dated February 16, 1932.

The main point of interest about the vehicles is the design of the windscreen, which, as can be seen from an accompanying illustration of the first van of the consignment to be completed, is provided with an additional top panel, set at a comparatively small angle to the horizontal. The object, of course, is to enable the telephone inspector to obtain a good view of the telephone lines as he travels along the road. To protect his eyes from dazzle, the top panel of the screen is tinted dull green, being )nade of Colourex safety glass.

Finished in a shade of dark green and having steel panels, the body is of exceptionally sturdy construction, and an unusual feature of the equipment is the employment of oil side and rear lamps.

That enterprising north-country concern, Oswald Tillotson, lad., Burnley, announces an interesting departure in connection with the sale of used vehicles. The company is offering a number of used and rebuilt vehicles equipped with new Dorman Ricardo oil engines, and an illustration on this page shows an A.E.C. 1928 forward-control model, equipped with such a power unit, ascending a 1-in-6 gradient with an 8-ton test load.

The directors recommend the payment of a final dividend of is. 6d. per share on the ordinary shares, making 15 per cent. for the year compared with 20 per cent. for the previous year, but the capital was increased during the year by the issue of 527,350 new shares. The general reserve fund is to receive £100,000, increasing it to £822,380, and, after taking into account the preference dividend, which absorbs 116,500, there is an amount of £135,023 to carry forward.

More Experiments with Gas as Fuel.

Speaking at the recent annual meeting in London of the Gas Light and Coke Co., Sir David Milne-Watson, the chairman, stated that, amongst other activities, the company is busily engaged in research work with regard to the use of compressed gas for motor vehicles. He believed that there is a future for gas in this connection, and in order to test it out a certain number of the undertaking's own motor vehicles had been adapted to run on " bottled " gas. Cununitts Oil Engine Popular.

We learn that six American lorry manufacturers are now producing vehicles equipped with the Cummins oil engine, which is being made in four and six-cylindered forms, both having a bore and stroke of 4f ins. and 6 ins. respectively.

The joint meeting of kindred societies organized by the -Institution of Automobile Engineers, that has now become an annual feature of the winter programme, will be held on Tuesday. March 7, at 7.30 p.m., in the hall of the Royal Geographical Society, Kensington Gore, London, .S.W.7, when Mr. H. R. Ricardo, F.R.S., will read a paper entitled "Some Notes and Observations on Petrol and Diesel Engines." The chair will be taken .by Sir Joseph Petavel, director of the National Physical Laboratory, whilst the discussion will be opened by Mr. H. T. Tizard, chairman of the Aeronautical Research Committee. • The societies participating in the meeting include the Diesel Engine Users Association, Institute of Fuel, Institution of Petroleum Technologists, Society of Engineers, Royal Aeronautical Society, Institution of Mechanical Engineers and the Institution of Automobile Engineers.

Crossley's Trading Results, The report of Crossley Motors, Ltd., for the year ended December 31, 1932, shows a profit of £3,009, which: reduces the debit balance as shown by the previous year's report (£42,981) to £39,972. The directors have considered it sound policy—in order to avoid fluctuations of profit or loss, according to the amount of productive labour on stock—to eliminate all overhead charges on stock, and, for this purpose, a sum of £29,780 has been appropriated from the general reserve fund, which then stands at £10,221.

Increase in Road Deliveries of Beet.

An interesting transport item appears in the report of the National Farmers' Union chief representative's statement, made to his committee on the sugar-beet campaign at the Spalding Factory, which has just closed its campaign for the season. This official makes the interesting disclosure that last year 22,500 loads of beet were transported by road, whilst during the season just closed 28,500 loads were delivered by motor lorry.