Steam or Petrol ? Steel or Rubber? 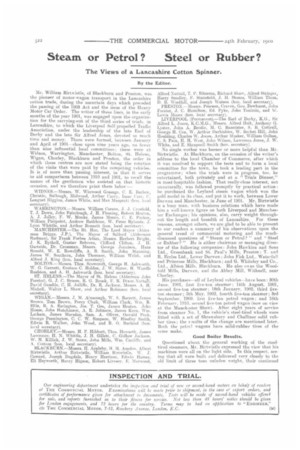 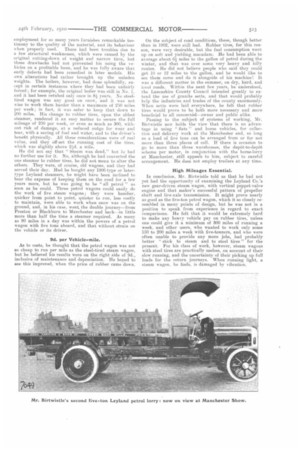 Page 6, 24th February 1910 — Steam or Petrol ? Steel or Rubber?
Close
Noticed an error?
If you've noticed an error in this article please click here to report it so we can fix it.
Keywords : West Pennine Moors, Steam Wagon, Blackburn, Lancashire, Tire, Chorley

The Views of a Lancashire Cotton Spinner.

Mr. William Birtwistle, of Blackburn and Preston, was the pioneer of motor-wagon transport in the Lancashire cotton trade, during the uncertain days which preceded the passing of the 1903 Act and the issue of the Heavy Motor Car Order. The writer of these lines, in the early months of the year 1901, was engaged upon the organization for the carrying-out of the third series of trials, in Lancashire, to ivhich the Liverpool Self-propelled Traffic Association, under the leadership of the late Earl of Derby and the late Sir Alfred Jones, devoted so much time and money. There were formed, between January and April of 1901—close upon nine years ago, no fewer than nine influential local committees; these were at Widnes, Warrington, Manchester, Bolton, St. Helens, Wigan, Chorley, Blackburn and Preston, the order in which these centres are now stated being the rotation of the visits that were paid by the competing vehicles. It is of more than passing interest, in that it serves to aid comparisons between 1910 and 1901, to recall the names of the gentlemen who assisted on that historic occasion, and we therefore print them below :— WIDNES.—Messrs. W. Winwood Gossage. C. E. Barlow, Christie, Bullough, Midwood, Arthur Carey. Isaac Carr. C. Longuet Higgins, James White, and Max Muspratt (hon. heat secretary).

No single worker was keener or more helpful than Mr. Birtwistle. At Blackburn, on the occasion of the writer's address to the local Chamber of Commerce, after which it was resolved to support the tests and to form a local committee for the town, he took a leading part in the programme ; when the trials were in progress, too, he entertained, both privately and at a. " Trials Dinner," in most-hospitable fashion. That really-dose interest, not unnaturally, was followed promptly by practical action : he purchased the Leyland steam wagon which won the gold medal in its class, and put it to work, between Lower Darwen and Manchester, in June of 1901. Mr. Birtwistle is a busy man, with business relations which have made him a well-known figure on both Liverpool and Manchester Exchanges; his opinions, also, carry weight throughout the length and breadth of Lancashire. For these reasons, amongst others, we are glad to be able to present to our readers a summary of his observations upon the general trend of commercial motoring and the muchdiscussed questions of "Steam or Petrol? " and "Steel or Rubber? " He is either chairman or managing director of the following companies: John Hawkins and Sons Ltd., Greenbank and St. Paul's Mills, Preston; T. and R. Eccles Ltd., Lower Darwen; John Fish Ltd., Waterfall and Primrose Mills, Blackburn; and G. Whiteley and Co., Ltd., Albion Mills, Blackburn. He also owns the Woodfold Mills, Darwen, and the Abbey Mill, Withnell, near Chorley. His purchases—all of Leyland vehicles—have been : 30th June. 1901, first five-ton steamer ; 14th August, 1901, second five-ton steamer 18th January. 1902, third fiveton steamer ; 5th May, 1902, fourth five-ton steamer: 3rd September. 1909. first five-ton petrol wagon; and 16th February. 1910. second live-ton petrol wagon (now on view at the Manchester Show). After eight years of service from steamer No. 1, the vehicle's steel-tired wheels were Fitted with a set of Shrewsbury and Clhalliner solid rubber tires; the r.sults of the change are mentioned later. Both the petrcl wagons have solid-rubber tires of the same make.

Questioned about the general working of the steeltired steamers, Mr. Birtwistle expressed the view that his machines were all on the light side. In this respect, seeing that all were built and delivered rely closely to the old limit of three tons unladen weight. their continued employment for so many years furnishes remarkable testimony to the quality of the material, and its behaviour when properly used. There had been troubles due to a few structural weaknesses, which were caused by the original cutting-down of weight and narrow tires, but these drawbacks had not prevented his using the vehicles on a profitable basis, and he was fully aware that early defects had been remedied in later models. His own alterations had rather brought up the unladen weights. The boilers, however, had done splendidly, except in certain instances where they had been unfairly forced ; for example, the original boiler was still in No. 1, and it had been retubed only once in 8i years. No steeltired wagon was any good on snow, and it was not wise to work them harder than a maximum of 250 miles per week; in fact, it was safer to keep that down to 2fal miles. His change to rubber tires, upon the oldest steamer, rendered it an easy matter to secure the full mileage of 250 per week, or even as much as 300, without risk of damage, at a reduced outgo for wear and tear, with a saving of fuel and water, and to the driver's benefit physically. All these considerations were of real value, and they off-set the running cost of the tires, which was slightly above 20. a mile. He did not say that " Steam was dead," but he had no further use for it. No, although he had converted the one steamer to rubber tires, he did not mean to alter the others. They were, of course, old wagons, and they had served their day. Had he bought any 1900-type or later. type Leyland steamers, he might have been inclined to bear the expense of keeping them on the road for a few years more, but he was going to be "all petrol " as soon as he could. Three petrol wagons could easily do the work of five steam wagons; they were handier, quicker from point to point, quieter to run, less costly to maintain, were able to work when snow was on the ground, and, in his ease, went the double journey—from Preston or Blackburn to Manchester and back—in little more than half the time a steamer required. As many as 80 miles in a day WAS within the powers of a petrol wagon with five tons aboard, and that without strain on the vehicle or its driver.

As to costs, he thought that the petrol wagon was not so cheap to run per mile as the steel-tired steam wagon, but he believed his results were on the right side of 9d., inclusive of maintenance and depreciation. He hoped to see this improved, when the price of rubber came down.

On the subject of road conditions, these, though better than in 1902, were still bad. Rubber tires, for this reason, were very desirable, but the fuel consumption went up on soft and yielding macadam. He had been able to average about 6i miles to the gallon of petrol during the winter, and that was over some very heavy and hilly routes. He did not believe people who said they could get 10 or 12 miles to the gallon, and he would like to see them come and do it alongside of his machine! It. was a different matter in the summer, on dry, hard, and level roads. Within the next few years, he understood, the Lancashire County Council intended greatly to extend the use of granite setts, and that would probably help the industries and trades of the county enormously. When setts were laid everywhere, he felt that rubber tires would prove to be both more necessary and more beneficial to all concerned—owner and public alike.

Passing to the subject of systems of working, Mr. Birtwistle now holds the view that there is no advantage in using " fiats " and horse vehicles, for collection and delivery work at the Manchester end, so long as a load of five tons can be arranged from or for not more than three places of call. If there is occasion to go to more than three warehouses, the depot-to-depot scheme per motor, in conjunction with the horse-lorry at Manchester, still appeals to him, subject to careful arrangement. He does not employ trailers at any time.

In conclusion, Mr. Birtwistle told us that he had not yet had the opportunity of examining the Leyland Co.'s new gear-driven steam wagon, with vortical poppet-valve engine and that maker's successful pattern of propeller shaft and live-axle transmission. It might prove nearly as good as the five-ton petrol wagon, which it so closely resembled in many points of design, but he was not in a position to speak from experience in regard to exact comparisons. He felt that it would be extremely hard to make any heavy vehicle pay on rubber tires, unless one could give it a minimum of 300 miles of running a week, and other users, who wanted to work only some 150 to 200 miles a week with five-tanners, and who were often unable to provide any more jobs, had probably better "stick to steam and to steel tires " for the present-. For his class of work, however, steam wagons with steel tires are practically useless, on account of their slow running, and the uncertainty of their picking up full loads for the return journeys. When running light, a steam wagon. he finds, is damaged by vibration.