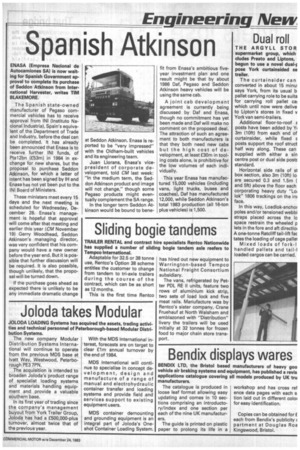 The Spanish state-owned manufacturer of Pegaso commercial vehicles has to receive approval from INI (Institut° Nacional Industrie), Spain's equivalent of the Department of Trade and Industry, before the deal can be completed. It has already been announced that Enasa is to receive further INI funds, of Pta12bn (£53m) in 1984 in exchange for new shares, but the proposal to purchase Seddon Atkinson, for which a letter of intent has been signed by IH and Enasa has not yet been put to the INI Board of Ministers.

These ministers meet every 15 days and the next meeting is scheduled for Wednesday, December 28. Enasa's management is hopeful that approval will come after that meeting and earlier this year (CM November 19) Gerry Woodhead, Seddon Atkinson's managing director, was very confident that his cornpany would have a new owner before the year end. But it is possible that further discussion will be required. It is also possible, though unlikely, that the proposal will be turned down.

If the purchase goes ahead as expected there is unlikely to be any immediate dramatic change at Seddon Atkinson. Enasa is reported to be "very impressed" with the Oldham-built vehicles and its engineering team.

Juan Llorans, Enasa's vicepresident of corporate development, told CM last week: "In the medium term, the Seddon Atkinson product and image will not change," though some Pegaso products might eventually complement the SA range.

In the longer term Seddon Atkinson would be bound to bene fit from Enasa's ambitious fiveyear investment plan and one result might be that by about 1986 Daf, Pegaso and Seddon Atkinson heavy vehicles will be using the same cab.

A joint cab development agreement is currently being discussed by Daf and Enasa, though no commitment has yet been made and Daf will make no comment on the proposed deal. The attraction of such an agreement to both manufacturers is that they both need new cabs but the high cost of development, at least £30m in tooling costs alone, is prohibitive for the low volumes of each individually.

This year Enasa has manufactured 15,000 vehicles (including vans, light trucks, buses and coaches), Daf has manufactured 12,000, while Seddon Atkinson's total 1983 production (all 16-ton plus vehicles) is 1,500.