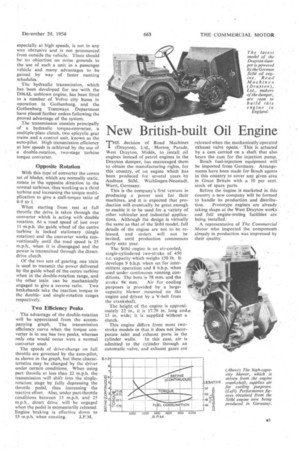 Page 29, 24th December 1954 — New British-built Oil Engine
Close
Noticed an error?
If you've noticed an error in this article please click here to report it so we can fix it.
Keywords : X25xe, Ford Cologne V6 Engine

THE decision of Road Machines (Drayton), Ltd., Horton, Parade, West Drayton, Middx, to install oil engines instead of petrol engines in the Drayton dumper, has encouraged them to obtain the manufacturing rights, for this country, of an engine which has been produced for several years by Andreas Stihl, Waibfingen-Neustadt, Wurtt, Germany.

This is the company's first venture in producing a power unit for their machines, and it is expected that production will eventually be great enough to enable it to be used for a variety of other vehicular and industrial applications. Although the design is virtually the same as that of the Stihl model, full details of the engine are not to be released, and orders will not be invited, until production commences early next year.

The Stihl engine is an air-cooled, single-cylindered two-stroke of 450 c.c. capacity which weighs 150 lb. It develops 9 b.h.p. when set for intermittent operation and 8 b.h.p. when used under continuous running con ditions. The bore is 78 mm. and the stroke 94 mm. Air for cooling purposes is provided by a largecapacity blower mounted on the engine and driven by a V-belt from the crankshaft.

This engine differs from most twostroke models in that it does not incorporate inlet and exhaust ports in the cylinder walls. In this case, air is admitted to the cylinder through an automatic valve, and exhaust gases are released when the mechanically operated exhaust valve opens. This is actuated by a cam carried on a shaft that also bears the cam for the injection pump.

Bosch fuel-injection equipment will be imported from Germany. Arrangements have been made for Bosch agents in this country to cover any given, area in Great Britain with a 10 per cent. stock of spare parts.

Before the engine is marketed in this country a new company will be formed to handle its production and distribu tion. Prototype engines are already taking shape at the West Drayton works and full engine-testing facilities are being installed.

A representative of The Commercial Motor who inspected the components already in production was impressed by their quality.