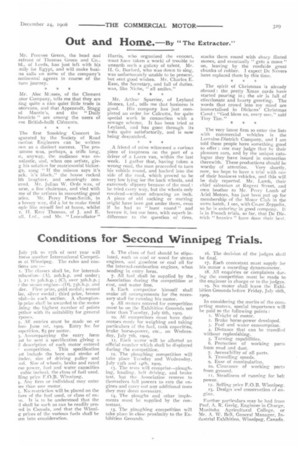 Page 19, 24th December 1908 — Out and Home.—By " The Extractor."
Close
Noticed an error?
If you've noticed an error in this article please click here to report it so we can fix it.
Keywords : British Leyland, Leyland Motors

Mr. Penrose Green, the head and refront of Thomas Green and Co., td., of Leeds, has just left with his .mily for Egypt, and will make busi/ss calls en some of the company's ontinental agents in course of the turn journey.

Mr. Alec Masses, of the Clement .otor Company, tells me that they are )ing quite a nice quiet little trade in otorvans, and that Appenrodt, Stagg id Mantle's, and the " Daily hronicle " are among the users of ese British-built Clements.

The first Smoking Concert inigurated by the Society of Road raction Engineers can be written )wn as a distinct success. The pro-amme was, perhaps, a trifle long, It, anyway, the audience was enusiastic, and, when one artiste, g-ivg his solution for matrimonial bickergs, sang " If the rnissus says it's ads, it's -black," the house rocked ith laughter, and seemingly conirred. Mr. Julian W. Orde was, of urse, a fine chairman, and vied with me of the artistes in recounting good

ories. Mr. Percy Frost-Smith, in s hrees.y way, did a lot to make timid oplt• like myself feel at home, whilst r. H. Kerr Thomas, of J. and E. all, Ltd., and Mr. " Leoradiator " Harris, who organised the concert, must have taken a world of trouble to unearth such a galaxy of talent. Mr. H. G. Burford, who was down to sing, was unfortunately unable to be present, but sent good wishes. Mr. Charles E. Esse, the Secretary, and full of duties, was, like Niobe, " all smiles."

Mr. Arthur Spurrier, of Leyland Motors, Ltd., tells me that business is good. His company has just completed an order for Calcutta, for quite special work in connection with a sewage scheme. It has been tried at Leyland, and has gone through its tests quite satisfactorily, and is now being despatched.

A friend of mine witnessed a curious piece of inaptness on the part of a driver of a Lacre van, within the last week. I gather that, having taken a wrong road, the man proceeded to turn his vehicle round, and backed into the side of the road, which proved to be very low lying for the back wheels, and extremely slippery because of the mud he tried every way, but the wheels only revolved—without advancing an inch. A piece of old sacking or matting might have been got under them, even if he had to " hunt round" and borrow it, but our hero, with superb indifference to the question of tires, stacks them round with sharp flinted stones, and eventually " gets a move" on, leaving by the roadside great chunks of rubber. I expect De Nevem have replaced them by this time.

The spirit of Christmas is already abroad : the pretty Xmas cards have started pouring in ; the air is full of effectionate and hearty greeting. The words that crowd into my mind are immortalised in Dickens' Christmas Carol : "God bless us, every one.," said Tiny Tim."

The very latest firm to enter the lists with commercial vehicles is the Lorraine-Dietrich Company, and I am told these people have something good to offer : one may judge that by their pleasure cars, and by the unique catalogue they have issued in connection therewith. These productions should be worthy of attention. Very shortly, now, we hope to have a trial with one of their business vehicles, and this will be duly reported. Mr. Lamb, their chief salesman at Regent Street, and own brother to Mr. Percy Lamb of Ariel Motors, has just been put up for membership of the Motor Club in the same hatch, I see, with Count Zeppelin, so he is entering in good company_ It is in French trials, so far, that De Dietrich " heavies " have done their best.