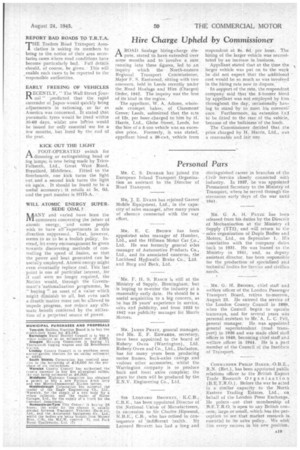 Page 21, 24th August 1945 — Hire Charge Upheld by Commissioner
Close
Noticed an error?
If you've noticed an error in this article please click here to report it so we can fix it.
Keywords : Labor

AROAD haulage hiring-charge dispute, stated to have extended over some months and to involve a sum _ running into three figures, led to an inquiry which the North-eastern Regional Transport Commissioner, MajorF, S. Eastwood, sitting with two assessors, held in Leeds recently under the _Road Haulage and Hire (Charges) Order, 1942. The inquiry was the first of its kind in the region.

The appellant, W. A. Adams,. wholesale crumpet baker, of. Claremont Grove; Leeds, submitted that the -rate of 12s. per hour, charged to him by H. Harris, Ltd., Globe -Street, Leeds, for the hire of a 5-ton vehicle was_ an eircessive price. Formerly, it was stated, appellant -hired a 30-cwt. vehicle from

respondent at 8s. 6c1.• per hoar. The hiring of the larger vehicle was necessitated by an increase in business.

Appellant stated that at the time the larger vehicle was put on to the work he did not expect that the additional cost would be so _much as was involved in the hiring rate now in dispute,'

In support of the rate, the respondent company said that the 5-tonner hired by appellant was not employed by hint throughout the day, occasionally having to stand by to meet his conveni: ence. Furthermore, an extension hal to be fitted to the rear of the vehicle, because of the bulkiness of the loads.

The Comniissioner decided that the price charged by H. Harris, Ltd., was a reasonable and fair one.