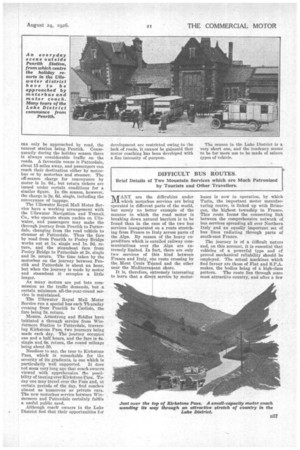 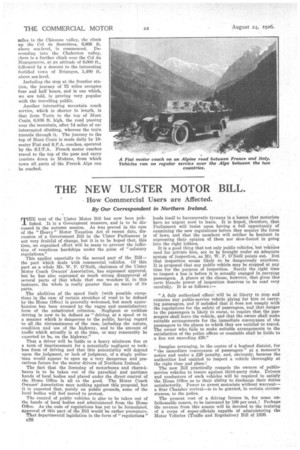 Page 55, 24th August 1926 — DIFFICULT BUS ROUTES.
Close
Noticed an error?
If you've noticed an error in this article please click here to report it so we can fix it.

Brief Details of Two Mountain Services which are Much Patronized by Tourists and Other Travellers.

MANY are the difficulties under which motorbus services are being operated in different parts of the world, but surely no better example of the manner in which the road motor is breaking down natural barriers is to be found than in the case of the two bus services inaugurated on a routestretching from Prance to Italy across parts cf the Alps. By reason of the heavy expenditure which is entailed railway communications over the Alps are exact, there are only his kind between e route crossing by nnel and the other ean shore.

The journey is of a difficult nature and, on this account, it is essential that vehicles of a powerful type and cf proved mechanical reliability should be employed. The actual machines which find favour are those of Fiat and S.P.A. makes, the bodies being of a high-class pattern. The route lies through some most attractive country, and after a few miles in the Chiesone valley, the climb up the Col de Sestrieres, 6,669 ft. above sea-level, is commenced. Descending into the Chaberton there is a further climb over the Col du Montgenevre, at an altitude of 6,000 ft., followed by a descent to the interesting fortified town of Briancon, 1,480 ft. above sea-level.

Including the stop at the frontier station, the journey of 75 miles occupies four and half hours, and is one which, we are told, is proving very popular with the travelling public.

Another interesting mountain coach service, which is shorter in length, is that from Turin to the top of Mont Cenis, 6,836 ft. high, the road passing over the mountain, after 14 miles of uninterrupted climbing, whereas the train tunnels through it. The journey to the top of Mont Cenis is made daily by 19seater Fiat and S.P.A. coaches, operated by the &LTA. French motor coaches travel to the top of the pass and carry tourists down to Modelle, from which town all parts of the French Alps can be reached.