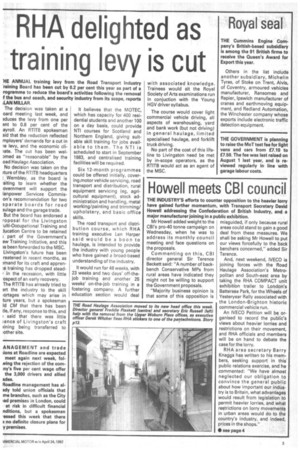 THE INDUSTRY'S efforts to counter opposition to the heavier lorry have gained further momentum, with Transport Secretary David Howell addressing the Confederation of British Industry, and a major manufacturer joining in a public exhibition.

Mr Howell added weight to the CBI's pro-40 tonne campaign on Wednesday, when he was to address its monthly council meeting and face questions on the proposals.

Commenting on this, CBI director general Sir Terence Beckett said: "A number of backbench Conservative MPs from rural areas have indicated they might not be willing to support the Government proposals.

"Majority business opinion is that some of this opposition is misguided, if only because rural areas could stand to gain a good deal from these measures. We shall be asking Mr Howell to put our views forcefully to the back benchers concerned," added Sir Terence.

And, next weekend, IVECO is joining forces with the Road Haulage Association's Metropolitan and South-east area by taking the RHA COMPACT unit exhibition trailer to London's Battersea Park, for the Wheels of Yesteryear Rally associated with the London-Brighton historic commercial vehicle run.

An IVECO Petition will be organised to record the public's views about heavier lorries and restrictions on their movement, and RHA officials and members will be on hand to debate the case for the lorry.

RHA area secretary Barry Knaggs has written to his members, seeking support in this public relations exercise, and he• commented: "We have almost neglected our obligation to convince the general public about how important our industry is to Britain, what advantages would result from legislation to permit heavier lorries, and what restrictions on lorry movements in urban areas would do to the country's industry, and indeed, prices in the shops."