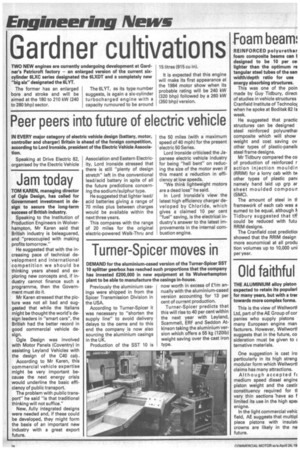 TOM KAREN, managing director of Ogle Design, has called for Government investment in design to secure the long-term success of British industry.

Speaking to the Institution of Production Engineers in Wolverhampton, Mr Karen said that British industry is beleaguered, and "preoccupied with making profits tomorrow."

He suggested that with the increasing pace of technical development and international competition we should be thinking years ahead and exploring new concepts and, if industry cannot finance such a programme, then the Government must do it.

Mr Karen stressed that the picture was not all bad and suggested that while the Italians might be thought the world's design leaders in "smart cars", the British had the better record in good commercial vehicle design.

Ogle Design was involved with Motor Panels (Coventry) in assisting Leyland Vehicles with the design of the C40 cab.

According to Mr Karen, this commercial vehicle expertise might be very important because the next energy crisis would underline the basic efficiency of public transport.

The problem with public transport" he said "is that traditional thinking will not suffice."

New, fully integrated designs were needed and, if these could be developed, they might form the basis of an important new industry with a great export future.