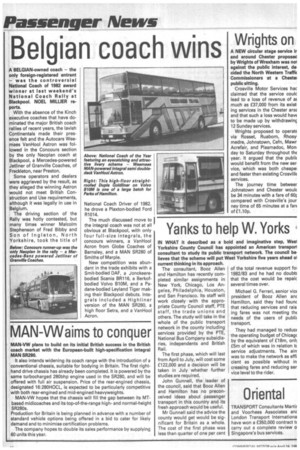 A BELGIAN-owned coach — the only foreign-registered entrant — was the controversial National Coach of 1982 award winner at last weekend's National Coach Rally at Blackpool. NOEL MILLIER reports.

With the absence of the Kinch executive coaches that have dominated the major British coach rallies of recent years, the lavish Continentals made their presence felt and the Autocars Weemaes VanHool Astron was followed in the Concours section by the only Neoplan coach at Blackpool, a Mercedes-powered Jetliner of Granville Coaches, of Freckleton, near Preston.

Some operators and dealers were aggrieved by the result, as they alleged the winning Astron would not meet British Construction and Use requirements, although it was legally in use in Belgium.

The driving section of the Rally was hotly contested, but many times winner Malcolm Stephenson of Fred Bibby and Son of Ingleton, North Yorkshire, took the title of National Coach Driver of 1982. he drove a Plaxton-bodied Ford R1014.

The much discussed move to the integral coach was not at all obvious at Blackpool, with only four full-size integrals, the concours winners, a VanHool Acron from Globe Coaches of Barnsley, and a MAN SR280 of Smiths of Marple.

New competition was abun dant in the trade exhibits with a Smit-bodied DAF, a Jonckeere bodied Scania BR116, a Berkofbodied Volvo B10M, and a Padane-bodied Leyland Tiger making their Blackpool debuts. Integrals included a Highliner version of the MAN SR280, a high floor Setra, and a VanHool Acron.