a We have an airfield and factory fire 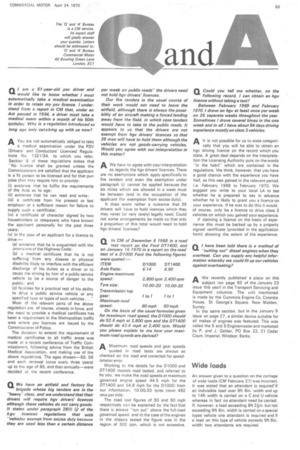 Page 65, 24th April 1970 — a We have an airfield and factory fire
Close
Noticed an error?
If you've noticed an error in this article please click here to report it so we can fix it.

brigade whose big tenders are in the "heavy" class, and we understand that their drivers will require hgv drivers' licences although these vehicles do not carry goods. It states under paragraph 28(1) (i) of the hgv licences regulations that with "vehicles exempt from excise duty because they are used less than a certain distance per week on public roads" the drivers need not hold hgv drivers' licences.

Our fire tenders in the usual course of their work would not need to leave the airfield, although there is always the possibility of an aircraft making a forced landing away from the field, in which case tenders would have to take to the public roads. It appears to us that the drivers are not exempt from hgv drivers' licences so that 35 men will have to hold them although the vehicles are not goods-carrying vehicles. Would you agree with our interpretation in this matter?

AWe have to agree with your interpretation

as regards the hgv drivers' licences. There are no exemptions which apply specifically to fire tenders and even the exemption under paragraph lj) cannot be applied because the six miles which are allowed in a week must be between land in the occupation of the applicant (for exemption from excise duty).

It does seem rather a nuisance that 35 drivers will have to hold licences which they may never (or very rarely) legally need. Could not some arrangements be made so that only a proportion of this total would need to hold hgv drivers' licences?