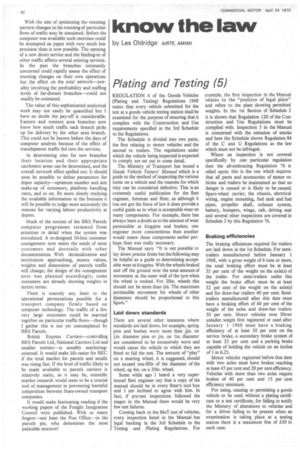 Page 64, 24th April 1970 — know the law
Close
Noticed an error?
If you've noticed an error in this article please click here to report it so we can fix it.

REGULATION 4 of the Goods Vehicles (Plating and Testing) Regulations 1968 states that every vehicle submitted for the test at a goods vehicle testing station shall be examined for the purpose of ensuring that it complies with the Construction and Use requirements specified in the 3rd Schedule to the Regulations.

The Schedule is divided into two parts, the first relating to motor vehicles and the second to trailers. The regulations under which the vehicle being inspected is expected to comply are set out in some detail.

The Ministry of Transport has issued a Goods Vehicle Testers' Manual which is a guide to the method of inspecting the various items on a vehicle and the reasons for which they can be considered defective. This is an extremely useful publication for the fleet engineer, foreman and fitter, as although it has not got the force of law it does provide a useful guide as to what is acceptable wear on many components. For example, there has always been a doubt as to the amount of wear permissible at kingpins and bushes; one engineer more conscientious than another would renew these components earlier perhaps than was really necessary.

The Manual says: "It is not possible to lay down precise limits but the following may be helpful as a guide to determining accept able wear at kingpins. With the wheels braked and off the ground note the total amount of movement at the outer wall of the tyre when the wheel is rocked. For 20in. wheels this should not be more than fin. The maximum permissible movement for wheels of other diameters should be proportional to this figure."

Laid down standards There are several other instances where standards are laid down, for example, spring pins and bushes worn more than in. on lin. diameter pins or in. on lin. diameter are considered to be excessively worn and would cause the vehicle to which they are fitted to fail the test. The amount of "play" on a steering wheel, it is suggested, should not exceed one-fifth of the diameter of the wheel, eg 4in. on a 201n. wheel.

Some while ago I heard a very experienced fleet engineer say that a copy of the manual should be in every fitter's tool box and I am inclined to agree with him. In fact, if pre-test inspections followed the stages in the Manual there would be very few test failures.

Coming back to the MoT test of vehicles, every inspection listed in the Manual has legal backing in the 3rd Schedule to the Testing and Plating Regulations. For example. the first inspection in the Manual relates to the "position of legal plate" and refers to the plate showing permitted weights. In the 1st ,Section of Schedule 3 it is shown that Regulation 120 of the Construction and Use Regulations must be complied with. Inspection 5 in the Manual is concerned with the emission of smoke and here the Schedule shows Regulation 84 of the C and U Regulations as the law which must not be infringed.

Where an inspection is not covered specifically by one particular regulation then the all-embracing Regulation 76 is relied upon; this is the one which requires that all parts and accessories of motor vehicles and trailers be maintained so that no danger is caused or is likely to be caused. Spare-wheel carrier, the chassis, electrical wiring, engine mounting, fuel tank and fuel pipes, propeller shaft, exhaust system, battery, bumpers, wings, cab, driving seat and several other inspections are covered in Schedule 3 by this Regulation 76.

For using, causing or permitting a goods vehicle to be used without a plating certificate or a test certificate, for failing to notify the Ministry of alterations to vehicles and for a driver failing to be present when an examination is taking place at a testing station there is a maximum fine of £50 in each case.