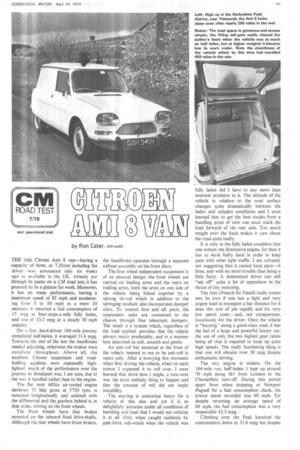 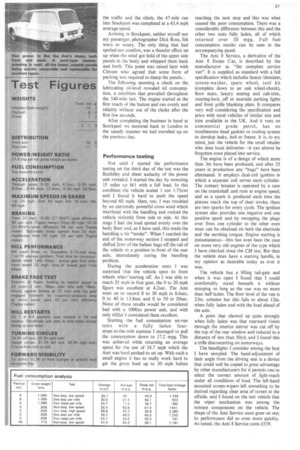 a capacity of 6cwt, or 7.25cwt including the . driver --was announced only six weeks ago as available in the UK. Already put through its paces on a CM road test, it has prooved to be a glutton for work. Moreover, it has no mean performance, having a maximum speed of 85 mph and accelerating from 0 to 50 mph in a mere 20 seconds; it returned a fuel consumption of 17 mpg at four-stops-a-mile fully laden, and one of 53.3 mpg at a steady 30 mph unladen.

On a fast, hard-driven 184-mile journey completed half-laden, it averaged 31.6 mpg. Towards the end of the test the handbrake needed adjusting, otherwise the brakes were excellent throughout. Above all, the excellent Citroen suspension and roadholding qualities were repeatedly highlighted: much of the performance over the journey to Stockport was, I am sure, due to the way it handled rather than to the engine.

The flat twin 602cc air-cooled engine develops 35 bhp gross at 5750 rpm, is mounted longitudinally and unitized with the differential and the gearbox behind it, in that order, driving on the front wheels.

The front wheels have disc brakes mounted on the inboard fixed drive-shafts. Although the rear wheels have drum brakes, the handbrake operates through a separate calliper assembly on the front discs.

The four-wheel independent suspension is of an unusual design: the front wheels are carried on leading arms and the rears on trailing arms, both the arms on one side of the vehicle being linked together by a sprung tic-rod which in addition to the springing medium also incorporates damper units. To control fore and aft pitch, the suspension units are connected to the chassis through four telescopic dampers. The result is a system which, regardless of the load applied, provides that the vehicle always reacts predictably, and in a manner best described as soft, smooth and gentle.

An anti-roll bar mounted at the front of the vehicle seemed to me to be anti-roll in name only. After a worrying few moments when first driving the vehicle, when on each corner I expected it to roll over, I soon learned that drive how I might, a turn-over was the most unlikely thing to happen and that the amount of roll did not imply instability.

The steering is somewhat heavy for a vehicle of this size and yet it is so delightfully accurate under all conditions of handling and load that I would not criticize it at all. Only when caught suddenly by gale-force side-winds when the vehicle was fully laden did I have to pay more than nominal attention to it. The attitude of the vehicle in relation to the road surface changes quite dramatically between the laden and unladen conditions and I soon learned that to get the best results from a handling point of view one must stack the load forward of the rear axle. Too much weight over the back makes it yaw about the road quite badly.

It is only in the fully laden condition that one notices the diminutive engine, for then it has to work fairly hard in order to keep pace with other light traffic. I am certainly not suggesting that it cannot keep pace—it does, and with no more trouble than being a little fussy. A determined driver can still "see off" quite a bit of opposition in the thrust of city motoring.

The Ami (French for friend) really comes into its own if one has a light and very urgent load to transport a fair distance for it does this sort of job rapidly and for very low petrol costs—and, not unimportant, luxuriously for the driver. Once the vehicle is "buzzing" along a good-class road, it has the feel of a large and powerful luxury car, the use of only the two highest gear ratios being all that is required to keep up quite high speeds. The really fascinating thing is that one still obtains over 30 mpg despite enthusiastic driving.

The tiny engine is tireless. On the 184-mile run, half-laden, I kept up around 70 mph along M1 from London to the Chesterfield turn-off. During this period apart from when stopping at Newport Pagnell for a fuel consumption check, the lowest speed recorded was 60 mph. Yet despite returning an average speed of 60 mph, the fuel consumption was a very respectable 42.3 mpg.

Climbing over the Peak knocked the consumption down to 31.6 mpg but despite the traffic and the climb, the 47-mile run into Stockport was completed at a 43.4 mph average speed.

Arriving in Stockport, neither myself nor my passenger, photographer Dick Ross, felt worn or weary. The only thing that had spoiled our comfort, was a thunder effect set up when the wind got hold of the upper side panels in the body and whipped them back and forth. This point was raised later with Citroen who agreed that some form of packing was required to damp the panels..

The following morning a check on the lubricating oil-level revealed nil consumption, a condition that prevailed throughout the 540-mile test. The engine started at the first touch of the button and ran evenly and reliably without use of the choke after the first few seconds.

After completing the business in hand at Stockport we motored back to London in the speedy manner we had travelled up. on the previous day.

Performance testing Not until I started the performance testing on the third day of the test was the flexibility and sheer audacity of the power unit revealed. I started the day by motoring 15 miles up Ml with a full load. In this condition the vehicle scaled 1 ton 1.75cwt and I found it hard to push the speed beyond 60 mph. Here, too, I was troubled by an extremely powerful cross-wind which interfered with the handling and rocked the vehicle violently from side to side. At this stage I had the load spread evenly over the body floor and, as 1 have said, this made the handling a hit "tender". When I reached the end of the motorway section I stopped and shifted 2cwt of the ballast bags off the tail of the vehicle to a position in front of the rear axle, immediately curing the handling problem.

Starting the fuel consumption set-run tests with a fully laden fourstops-to-the-mile exercise I managed to pull the consumption down to 17.2 mpg. This was achieved while returning an average speed for the test of 24.7 mph which the Ami was hard pushed to set up. With such a small engine it has to really work hard to get the gross load up to 30 mph before reaching the next stop and this was what caused the poor consumption. There was a considerable difference between this and the other two tests fully laden, all of which returned over 30 mpg. Full fuel consumption results can be seen in the accompanying panel.

The Ami 8 Service, a derivative of the Ami 8 Estate Car, is described by the manufacturer as "the complete service van". It is supplied as standard with a full specification which includes heater /demister, screen-washer, spare wheel, tool kit (complete down to an oak wheel-chock), floor mats, luxury seating and cab-trim, steering-lock, off or nearside parking lights and front grille blanking plate. It compares very well considering the specification and price with most vehicles of similar size and trim available in the UK. And it runs on commercial grade petrol, has no troublesome head gaskets or cooling system to develop leaks, boil or freeze. It is, to my mind, just the vehicle for the small retailer who does local deliveries-it can almost be forgotten once placed into service.

The engine is of a design of which more than 3m have been produced, and after 25 years in production any "bugs" have been eliminated. It employs dual-coil ignition in which a separate coil serves each cylinder. The contact breaker is operated by a cam on the crankshaft and runs at engine speed, and as a spark is produced each time the pistons reach the top of their stroke, there are two sparks for every cycle. The ignition system also provides one negative and one positive spark and by swopping the plugs over from one cylinder to the other even wear can be obtained on both the electrode and the earthing tongue. Engine starting is instantaneous-this has even been the case on some very old engines of the type which I have checked since the CM test. But then the vehicle does have a starting handle, in my opinion as desirable today as ever it was.

The vehicle has a lifting tail-gate and when it was open I found that I could comfortably stand beneath it without stooping so long as the van was no more than half-laden. The floor level of the van is 23in. unladen but this falls to about 12in. when fully laden and with the load ahead of the axle.

A point that showed up quite strongly when fully laden was that rearward vision through the interior mirror was cut off by the top of the rear window and reduced to a distance of less than 50yd, and I found this a trifle disconcerting on motorways.

The headlights I consider among the best I have sampled. The hand-adjustment of their angle from the driving seat is a device that could well be copied to great advantage by other manufacturers for it permits one to select the correct amount of light-reach under all conditions of load. The left-hand mounted screen-wipers left something to be desired regarding clear area of screen at the offside, and I found on the test vehicle that the wiper mechanism was among the noisiest components on the vehicle. The shape of the Ami Service soon grew on me; its performance did so even more quickly. As tested, the Ami 8 Service costs £539.