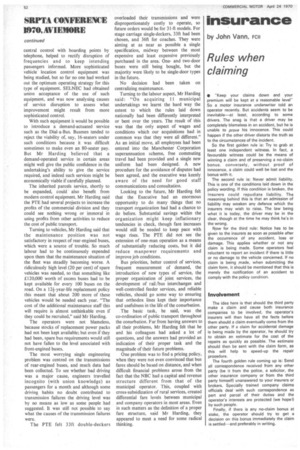 Page 54, 24th April 1970 — Insurance
Close
Noticed an error?
If you've noticed an error in this article please click here to report it so we can fix it.
Keywords : Types Of Insurance, Insurance, Finance, Liability Insurance, Vehicle Insurance, Disaster / Accident

• "Keep your claims down and your premium will be kept at a reasonable level'' So a motor insurance underwriter told an operator recently. But accidents seem to be inevitable—at least, according to some drivers. The snag is that a driver may be completely blameless in an accident, but he is unable to prove his innocence. This could happen if the other driver distorts the truth as to the circumstances of the incident.

So the first golden rule is: Try to grab at least one independent witness. In fact, a favourable witness could be the means of winning a claim and of preserving a no-claim bonus. conversely, without proof of innocence, a claim could well be lost and the bonus with it.

The second rule is: Never admit liability. This is one of the conditions laid down in the policy wording. If this condition is broken, the insurers could repudiate liability. The reasoning behind this is that an admission of liability may weaken any defence which the insurers may wish to raise. The law being what it is today, the driver may be in the clear, though at the time he may think he's in the wrong.

Now for the third rule: Notice has to be given to the insurers as soon as possible after the occurrence of any accident, loss or damage. This applies whether or not any claim is being made. Some operators feel reluctant to report an incident if there is little or no damage to the vehicle concerned. If no claim is being made, when submitting the claim form, it should be mentioned that this is merely the notification of an accident to comply with the policy condition.

The idea here is that should the third party make a claim and cause both insurance companies to be involved, the operator's insurers will then have all the facts before them should a claim eventually come from the other party. If a claim for accidental damage is being made by the operator, he should try to obtain an estimate for the cost of the repairs as quickly as possible. The estimate should then be sent with the claim form, as this will help to speed-up the repair procedure.

The fourth golden rule coming up is: Send all correspondence received from any other party (be it from the police, a solicitor, the other insurance company or from the third party himself) unanswered to your insurers or brokers. Specially trained company claims officials deal with such correspondence as part and parcel of their duties and the operator's interests are protected (we hope!) by such people.

Finally, if there is any no-claim bonus at stake, the operator should try to get a decision on this bonus immediately the claim is settled and preferably in writing.