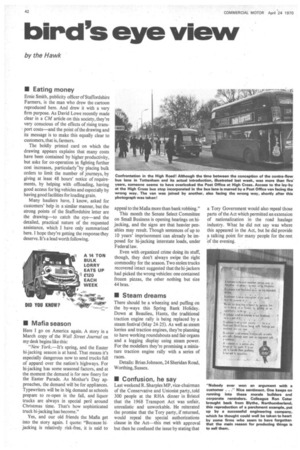 by the Hawk • Eating money

Ernie Smith, publicity officer of Staffordshire Farmers, is the man who drew the cartoon reproduced here. And drew it with a very firm purpose. As David Lowe recently made clear in a CM article on this society, they're very conscious of the effects of rising trans'port costs—and the point of the drawing and its message is to make this equally clear to customers, that is, farmers.

The boldly printed card on which the drawing appears explains that many costs have been contained by higher productivity, but asks for co-operation in fighting further cost increases, particularlylv placing bulk orders to limit the number of journeys, by giving at least 48 hours' notice of requirements, by helping with offloading, having good access for big vehicles and especially by having good facilities for loading grain.

Many hauliers have, I know, asked for customers' help in a similar manner, but the strong points of the Staffordshire letter are the drawing—to catch the eye—and the detailed, practical nature of the requested assistance, which I have only summarized here. I hope they're getting the response they deserve. It's a lead worth following.

Here I go on America again. A story in a March copy of the Wall Street Journal on my desk begins like this: "New York.—It's spring, and the Easter hi-jacking season is at hand. That means it's especially dangerous now to send trucks full of apparel over the nation's highways. For hi-jacking has some seasonal factors, and at the moment the demand is for new finery for the Easter Parade, As Mother's Day approaches, the demand will be for appliances. Typewriters will be in big demand as schools prepare to re-open in the fall, and liquor trucks are always in special peril around Christmas time. That's how sophisticated truck hi-jacking has become."

Yes, and our old friends the Mafia get into the story again. I quote: "Because hijacking is relatively risk-free, it is said to appeal to the Mafia more than bank robbing."

This month the Senate Select Committee on Small Business is opening hearings on hijacking, and the signs are that heavier penalties may result. Though sentences of up to 10 years' imprisonment can already be imposed for hi-jacking interstate loads, under Federal law.

Even with organized crime doing its stuff, though, they don't always swipe the right commodity for the season. Two stolen trucks recovered intact suggested that the hi-jackers had picked the wrong vehicles: one contained frozen pizzas, the other nothing but size 44 bras.

There should be a wheezing and puffing on the by-ways this Spring Bank Holiday. Down at Beaulieu, Hants, the traditional traction engine rally is being replaced by a steam festival (May 24-25). As well as steam lorries and traction engines, they're planning to have working roundabouts and fair organs and a logging display using steam power. For the modellers they're promising a miniature traction engine rally with a series of races.

Last weekend R. Sharpies MP, vice-chairman of the Conservative and Unionist party, told 300 people at the RHA dinner in Bristol that the 1968 Transport Act was unfair, unrealistic and unworkable. He reiterated the promise that the Tory party, if returned, would repeal the special authorizations clause in the Act—this met with approval but then he confused the issue by stating that a Tory Government would also repeal those parts of the Act which permitted an extension of nationalization in the road haulage industry. What he did not say was where this appeared in the Act, but he did provide a talking point for many people for the rest Of the evening.