THE establishment of a vehicle replacement policy will form an 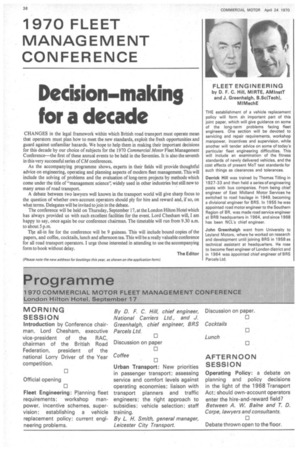 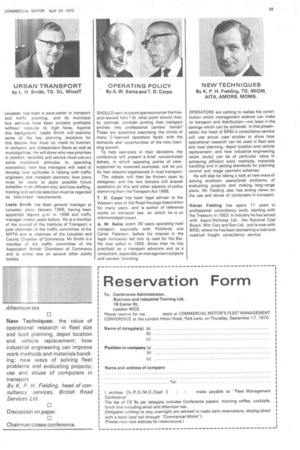 Page 40, 24th April 1970 — THE establishment of a vehicle replacement policy will form an
Close
Noticed an error?
If you've noticed an error in this article please click here to report it so we can fix it.
Keywords : Bus, Transport, Business / Finance

important part of this joint paper, which will give guidance on some of the long-term problems facing fleet engineers. One section will be devoted to servicing and repair requirements, workshop manpower, incentives and supervision, while another will tender advice on some of today's particular fleet engineering difficulties. This will include an examination of the fitness standards of newly delivered vehicles, and the cost effects of present MoT test standards for such things as clearances and tolerances.

Derrick Hill was trained by Thomas Tilling in 1927-33 and then held a series of engineering posts with bus companies. From being chief engineer of East Midland Motor Services he switched to road haulage in 1949, becoming a divisional engineer for BRS. In 1955 he was appointed road motor engineer to the Southern Region of BR, was made road service engineer at BAR headquarters in 1964, and since 1968 has been NCL's chief engineer.

John Greenhalgh went from University to Leyland Motors, where he worked on research and development until joining BRS in 1958 as technical assistant at headquarters. He rose to become fleet engineer of London district and in 1964 was 'appointed chief engineer of BRS Parcels Ltd. Leicester has been a pace-setter in transport and traffic planning, and its municipal bus services have been enviably profitable without recourse to high fares. Against this background. Leslie Smith will examine some of the key planning decisions for this decade that must be made by busmen in company and independent fleets as well as municipalities. He will show why new priorities in comfort, reliability and service must rule out some traditional attitudes to operating economies; how bus managers will need to develop new aptitudes in liaising with traffic engineers and transport planners; how plans must be made to apply possible future subsidies in an efficient way; and how staffing, training and vehicle selection must be regarded as interlinked requirements.

Leslie Smith has been general manager at Leicester since January 1966, having been appointed deputy g.m. in 1958 and traffic manager twelve years before. He is a member of the council of the Institute of Transport, a past chairman of the traffic committee of the MPTA and is chairman of the Leicester and County Chamber of Commerce. Mr Smith is a member of the traffic committee of the Associated British Chambers of Commerce and is active also on several other public bodies. SHOULD own-account operators enter the hireand-reward field ? At what point should they, by contrast, consider putting their transport entirely into professional carriers' hands? These are questions exercising the minds of many C-licensed operators faced with the demands and opportunities of the new licensing system.

To help operators in their decisions, the conference will present a. brief, concentrated debate, in which opposing points of view, supported by reasoned examples, will be put by two lawyers experienced in road transport.

The debate will then be thrown open to delegates, and the two lawyers will answer questions on this and other aspects of policy stemming from the Transport Act 1968.

T. D. Corpe has been legal adviser to the Western area of the Road Haulage Association for many years. and is author of reference works on transport law, on which he is an acknowledged expert.

A. W. Balne spent 30 years operating road transport, especially with Pickfords and Carter Paterson, before his interest in the legal intricacies led him to read for the Bar. He was called in 1955. Since then he has practised as a transport advocate and as a consultant, especially on management subjects and carriers' licensing. OPERATORS are coming to realize the contribution which management science can make to transport and distribution—not least in the savings which can be achieved. In this presentation the head of BRSL's consultancy service will use actual case studies to show how operational research can be used in fleet size and load planning, depot location and vehicle replacement: and how industrial engineering (work study) can be of particular value in achieving efficient work methods, materials handling and in setting standards for planning control and wage payment schemes.

He will also be taking a look at new ways of solving stubborn operational problems, of evaluating projects and making long-range plans. Mr Fielding also has strong views on the use and abuse of computers in transport.

Kieran Fielding has spent 17 years in professional consultancy work, starting with the Treasury in 1953. In industry he has served with Aspro-Nicholas Ltd., the National Coal Board, Wm Cory and Son Ltd., and is now with BRSL where he has been pioneering a road and road/rail freight consultancy service.