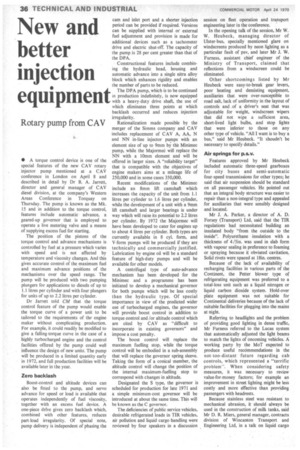 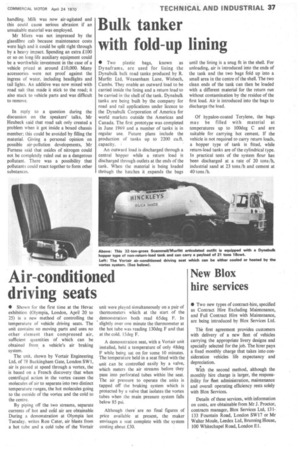 Page 38, 24th April 1970 — New and better injection equipment
Close
Noticed an error?
If you've noticed an error in this article please click here to report it so we can fix it.
Keywords : Fluid Dynamics, Pump, Internal Combustion Engine, Engine, Turbocharger

• A torque control device is one of the special features of the new CAV rotary injector pump mentioned at a CAV conference in London on April 8 and described in detail by Dr B. A. Jarrett, director and general manager of CAV diesel division, at the company's Western Areas Conference in Torquay on Thursday. The pump is known as the Mk. 15 and in addition to the torque control, features include automatic advance, a geared-up governor that is employed to operate a live metering valve and a means of supplying excess fuel for starting.

The position of the pistons of the torque control and advance mechanisms is controlled by fuel at a pressure which varies with speed and is not affected by temperature and viscosity changes. And this gives accurate control of the maximum fuel and maximum advance positions of the mechanisms over the speed range. The pump will be produced with two pumping plungers for applications to diesels of up to 1.1 litres per cylinder and with four plungers for units of up to 2.2 litres per cylinder.

Dr Jarrett told CM that the torque control feature of the pump would enable the torque curve of a power unit to be tailored to the requirements of tilr engine maker without complicating production. For example, it could readily be modified to give a falling-torque curve in the case of a highly turbocharged engine and the control facilities offered by the pump could well influence the design of new units'. The pump will be produced in a limited quantity early in 1972, and full production facilities will be available later in the year.

Zero backlash Boost-control and altitude devices can also be fitted to the pump, and servo advance for speed or load is available that operates independently of fuel viscosity, together with an excess fuel device. A one-piece drive gives zero backlash which, combined with other features, reduces part-load irregularity. Of special note, pump delivery is independent of phasing the cam and inlet port and a shorter injection period can be provided if required. Versions can be supplied with internal of external fuel adjustment and provision is made for additional devices such as a tachometer drive and electric shut-off. The capacity of the pump is 28 per cent greater than that of the DPA.

Constructional features include combining the hydraulic head, housing and automatic advance into a single nitra alloy block which enhances rigidity and enables the number of parts to be reduced.

The DPA pump, which is to be continued in production indefinitely, is now equipped with a heavy-duty drive shaft, the use of which eliminates three points at which backlash occurred and reduces injection irregularity.

Rationalization made possible by the merger of the Simms company and CAV includes replacement of CAV A, AA, N and NN in-line injector pumps with an element size of up to 9mm by the Minimec pump, while the Majormee will replace the NN with a 10min element and will be offered in larger sizes. A "reliability target" that is compatible with the objectives of engine makers aims at a mileage life of 250,000 and in some cases 350,000.

A centrifugal type of auto-advance mechanism has been developed for the Minimec and a programme has been initiated to develop a mechanical governor for both pumps which will be less costly than the hydraulic type. Of special importance in view of the predicted wider use of turbocharged engines, the governor will provide boost control in addition to torque control and /or altitude control which are cited by CAV as "difficult to incorporate in existing governors" and impose a cost penalty.

Designated the S type, the governor is scheduled for production for late 1971 and a simple minimum-cost governor will be introduced at about the same time. This will be known as the C governor.

The deficiencies of public service vehicles, desirable refrigerated loads in TIR vehicles, air pollution and liquid cargo handling were reviewed by four speakers in a discussion session on fleet operation and transport engineering later in the conference.

In the opening talk of the session, Mr W. W. Heubeck, managing director of Ulster-bus, specially mentioned glare on windscreens produced by neon lighting as a particular fault of psv, and later Mr J. W. Furness, assistant chief engineer of the Ministry of Transport, claimed that reflections from a windscreen could be eliminated.

Other shortcomings listed by Mr Heubeck were easy-to-break gear levers, poor heating and demisting equipment, auxiliaries that were over-susceptible to road salt, lack of uniformity in the layout of controls and -of a driver's seat that was adjustable for weight, windscreen wipers that did not wipe a sufficient area, short-lived light bulbs, and stop lights that were inferior to those on any other type of vehicle. "A111 want is to buy a bus," said Mr Heubeck. "It shoudn't be necessary to specify details."

Features approved by Mr Heubeck included automatic three-speed gearboxes for city buses and semi-automatic four-speed transmissions for other types; he said that air suspension should be standard on all passenger vehicles. He pointed out that an integral body structure was easier to repair than a non-integral type and appealed for auxiliaries that were sensibly designed and located.

Mr J. A. Parker, a director of A. D. Forsey (Transport) Ltd, said that the TIR regulations had necessitated building an insulated body "from the outside to the inside". Polyurethane insulation with a thickness of 4 /5in. was used in slab form with vapour sealing in preference to foaming or spraying because it obviated cavitation. Solid rivets were spaced at 18in. centres.

Because of the lack of availability of recharging facilities in various parts of the Continent, the Petter blower type of refrigerating equipment was preferred to a total-loss unit such as a liquid nitrogen or liquid carbon dioxide system. Hold-over plate equipment was not suitable for Continental deliveries because of the lack of suitable facilities for plugging into the mains at night.

Referring to headlights and the problem of providing good lighting in dense traffic, Mr Furness referred to the Lucas system that automatically adjusted the light beams to match the lights of oncoming vehicles. A working party by the MoT expected to produce useful recommendations in the not-too-distant •future regarding cab controls, which represented a ."terrific problem". When considering safety measures, it was necessary to review value-for-money factors; for example an improvement in street lighting might be less costly and more effective than providing passengers with headrests.

Because stainless steel was resistant to mechanical abrasion, it should always be used in the construction of milk tanks, said Mr D. R. Miers, general manager, contracts division of Wincanton Transport and Engineering Ltd, in a talk on liquid cargo handling. Milk was now air-agitated and this could cause serious abrasion if an unsuitable material was employed.

Mr Miers was not impressed by the glassfibre cab because maintenance costs were high and it could be split right through by a heavy impact. Spending an extra £100 or so on long-life auxiliary equipment could be a worthwhile investment in the case of a vehicle priced at around £10,000. Many accessories were not proof against the ingress of water, including headlights and tail lights. An additive was now mixed with road salt that made it stick to the road; it also stuck to vehicle parts and was difficult to remove.

In reply to a question during the discussion on the speakers' talks, Mr Heubeck said that road salt only created a problem when it got inside a boxed chassis member; this could be avoided by filling the material. Giving a personal opinion on possible air-pollution developments, Mr Furness said that oxides of nitrogen could not be completely ruled out as a dangerous• pollutant. There was a possibility that pollutants could react together to form other substances.