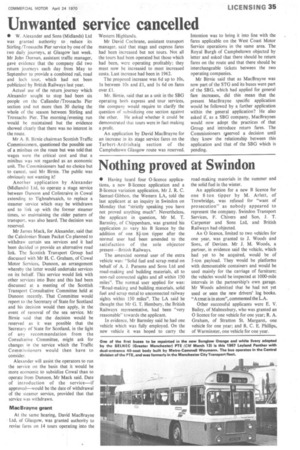 Page 37, 24th April 1970 — Unwanted service cancelled
Close
Noticed an error?
If you've noticed an error in this article please click here to report it so we can fix it.
Keywords : Dunoon, Trossachs, Caledonian Macbrayne

• W. Alexander and Sons (Midlands) Ltd was• granted authority to . reduce its Stirling /Trossachs Pier service by one of the two daily journeys, at Glasgow last week. Mr John Dornan, assistant traffic manager, gave evidence that the company did two return journeys each day from May to September to provide a combined rail, road and loch tour, which had not been publicized by British Railways last year.

Actual use of the return journey which Alexander sought to stop had been six people on the Callander /Trossachs Pier section and not more then 30 during the whole of the season between Stirling and Trossachs Pier. The morning/evening run would be maintained but the evidence showed clearly that there was no interest in the route.

Mr A. B. Birnie chairman Scottish Traffic Commissioners, questioned the possible use of a minibus on the route but was told that wages were the critical cost and that a minibus was not regarded as an economic unit. The Commissioners had no choice but to cancel, said Mr Birnie. The public was obviously not wanting it!

Another application by Alexander (Midlands) Ltd, to operate a stage service between Dunoon and Colintraive in Cowal extending to Tighnabruaich, to replace a steamer service which may be withdrawn and to link up with the former steamer times, so maintaining the older pattern of transport, was also heard. The decision was reserved.

Mr James Mack, for Alexander, said that the Caledonian Steam Packet Co planned to withdraw certain sea services and it had been decided to provide an alternative road link. The Scottish Transport Group had discussed with Mr H. C. Graham, of Cowal Motor Services, Dunoon, an arrangement whereby the latter would undertake services on its behalf. This service would link with other services into Bute and this had been discussed at a meeting of the Scottish Transport Consultative Committee held at Dunoon recently. That Committee would report to the Secretary of State for Scotland and his decision would then apply, in the event of removal of the sea service. Mr Birnie said that the decision would be reserved as it was possible that the Secretary of State for Scotland, in the light of any recommendation from the Consultative Committee, might ask for changes in the service which the Traffic Commissioners would then have to consider.

Alexander will assist the operators to run the service on the basis that it would be more economic to subsidize Cowal than to operate from Dunoon, Mr Mack said. Date of introduction of the service—if approved—would be the date of withdrawal of the steamer service, provided that that service was withdrawn.

MacBrayne grant At the same hearing, David MacBrayne Ltd, of Glasgow, was granted authority to revise fares on 14 tours operating into the Western Highlands.

Mr David Cochrane, assistant transport manager, said that stage and express fares had been increased but not tours. Not all the tours had been operated but those which had been, were operating profitably; they must now be increased to meet increased costs. Last increase had been in 1962.

Mr. Birnie, said that as a unit in the SBG operating both express and tour services, the company would require to clarify the question of subsidizing one section against the other. He asked whether it could be demonstrated that tours were in fact making a profit.

An application by David MacBrayne for an increase in its stage service fares on the Tarbert-Ardrishaig section of the Campbeltown Glasgow route was reserved. Intention was to bring it into line with the fares applicable on the West Coast Motor Service operations in the same area. The Royal Burgh of Campbeltown objected by letter and asked that there should be return fares on the route and that there should be interchangeable tickets between the two operating companies.

Mr Birnie said that as MacBrayne was now part of the STG and its buses were part of the SBG, which had applied for general fare increases, did this mean that the present MacBrayne specific application would be followed by a further application within the general application? He also asked if, as a SBG company, MacBraynes would now adopt the practices of that Group and introduce return fares. The Commissioners rperved a decision until they knew the relationship between this application and that of the SBG which is pending.