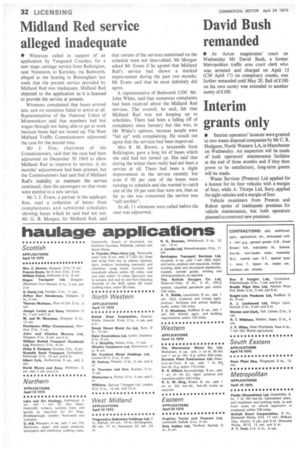 • Witnesses called in support of an application by Vanguard Coaches, for a new stage carriage service from Bulkington, near Nuneaton, to Keresley, via Bedworth, alleged at the hearing in Birmingham last week that the present service provided by Midland Red was inadequate. Midland Red objected to the application as it is licensed to provide the service at present.

Witnesses complained that buses arrived late, and on occasions failed to arrive at all. Representatives of the National Union of Mineworkers said that members had lost wages through not being able to get to work because buses had not turned up. The West Midland Traffic Commissioners adjourned the case for the second time.

Mr J. Else, chairman of the Commissioners, said that the case had been adjourned on December 30 1969 to allow Midland Red to improve its service. A six months' adjournment had been granted. but the Commissioners had said that if Midland Red's inability to maintain the service continued, then the passengers on that route were entitled to a new service.

Mr I. J. Evans, a partner in the applicant firm, read a collection of letters from complainants and submitted schedules showing buses which he said had not run. Mr G. B. Morgan, for Midland Red, said that certain of the services mentioned on the schedule were not time-tabled. Mr Morgan asked Mr Evans if he agreed that Midland Red's service had shown a marked improvement during the past two months. Mr Evans said that he most definitely did agree.

A representative of Bedworth UDC Mr. John White, said that numerous complaints had been received about the Midland Red services. The council, he said, felt that Midland Red was not keeping up to schedules. There had been a falling off of complaints since January but this was, in Mr White's opinion, because people were "fed up" with complaining. He would not agree that the services had been improved.

Mrs B. M. Brown, a housewife from Bulkington, gave a long list of buses which she said had not turned up. She said that during the winter there really had not been a service at all. There had been a slight improvement in the service recently but even if 90 per cent of the buses were running to schedule and she wanted to catch one of the 10 per cent that were not, then as far as she was concerned the service was "still terrible".

In all, 11 witnesses were called before the case was adjourned.