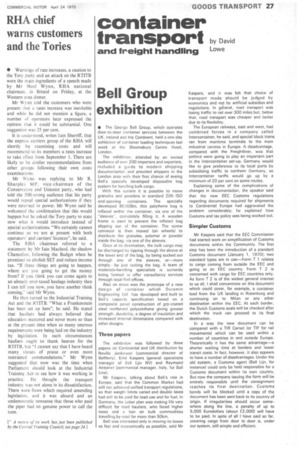 • The George Bell Group, which operates door-to-door container services between the UK, Ireland and the Continent, held a one-day exhibition of container loading techniques last week at the Bloomsbury Centre Hotel, London.

The exhibition, attended by an invited audience of over 200 importers and exporters, included a guide to modern shipping documentation and provided shippers in the London area with their first chance of seeing Bell's specially developed disposable bag system for handling bulk cargo.

With this system it is possible to move granules and powders in standard 20ft ISO end-opening containers. The specially developed 80.008in. thin polythene bag is inflated within the container, via one of the "sleeves", completely filling it. A wooden frame is used to prevent the inflated bag slipping out of the container. The screw conveyor is then moved (on wheels) to distribute the granules, polymer or powder inside the bag, ‘fa one of the sleeves.

Once at its destination, the bulk cargo may be discharged by tipping through the sleeve at the lower end of the bag, by being sucked out through one of the sleeves, or—more simply—by just cutting the bag. A team of materials-handling specialists is currently being formed to offer consultancy services through local Bell offices.

Also on show was the prototype of a new design of container which Duramin Engineering Ltd. has developed and built to Bell's capacity specification based on a. composite panel construction of grp-coated steel reinforced polyurethane giving greater strength, durability, a degree of insulation and increased internal dimensions compared with other designs.

Mr Kaspers, talking about Bell's role in Europe, said that the Common Market had still not achieved unified transport regulations, so that weight limits varied and double taxes had still to be paid for road use and for fuel. In Germany, the Leber plan was making life very difficult for road hauliers, who faced higher taxes and a ban on bulk commodities travelling by road for more than 50km.

Bell was interested only in moving its boxes as fast and economically as possible, said Mr Kaspers, and it was felt that choice of • transport mode should be judged by economics and nqt by artificial subsidies and regulations. In gdheral, road transport was losing traffic to rail over 300 miles but, below that, road transport was cheaper and better due to its flexibility.

The European railways, east and west, had combined forces. in a company called Intercontainer, he said, and special block trains ran from maritime terminals to the main industrial centres in Europe. A disadvantage, compared with the Freightliner, was that politic S were going to play an important part in the Intercontainer set-up. Germany would like to give preference to its local ports by subsidizing traffic to northern Germany, so Intercontainer tariffs would go up by a minimum of 20 per cent on some routes.

Explaining some of the complications of changes in documentation, the speaker said that the new EEC Customs regulations regarding documents required for shipments to Continental Europe had aggravated the problem considerably; he explained how Customs and tax policy was being worked out.

Mr Kaspers said that the EEC Commission had started work on simplification of Customs documents within the Community. The first step has been the introduction of a standard Customs document (January 1, 1970); two standard types are in use—Form T 1 relates to cargo coming from outside the EEC and going to an EEC country. Form T 2 is concerned with cargo for EEC countries only. As form T 2 is of the widest general interest to us all, I shall concentrate on this document which could cover, for example, a container load from the UK landing in Rozenburg and continuing on to Milan or any other destination within the EEC. At each border, the Dutch Customs seals will be checked after which the truck can proceed to its final destination.

In a way the new document can be compared with a TIR Carnet (or TIF for rail movements) which can be used within a number of countries in and outside Europe. Theoretically it has the same advantage—a shorter waiting time at borders and lower transit costs. In fact, however, it also appears to have a number of disadvantages. Under the old system, a Customs agent (Bell Lijn, for instance) could only be held responsible for a Customs document within its own country. But now the company issuing the form will be entirely responsible until the consignment reaches its final destination. Customs bonds will be blocked until a copy of the document has been sent back to its country of origin. If irregularities should occur somewhere along the line, a penalty of up to 5,000 Eurodollars (about £2,000) will have to be paid. In spite of all I have said so far, covering cargo from door to door is, under our system, still simple and efficient.