• The 25th annual report of the Road Haulage Association, 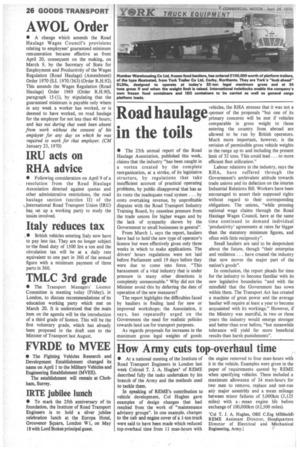 Page 28, 24th April 1970 — • The 25th annual report of the Road Haulage Association,
Close
Noticed an error?
If you've noticed an error in this article please click here to report it so we can fix it.

published this week, claims that the industry "has been caught in a vortex created by the complete reorganization, at a stroke, of its legislative structure, by regulations • that take insufficient account of practical operating problems, by public disapproval that has as its roots the inadequate road system. . . by costs overtaking revenue, by unprofitable disputes with the Road Transport Industry Training Board, by ceaseless pressure from the trade unions for higher wages and by the lack of sympathy shown by the Government to small businesses in general".

From March 1, says the report, hauliers have had to hold the new type of operator's licence but were effectively given only three weeks in which to make applications. The drivers' hours regulations were not laid before Parliament until 19 days before they were due to come into force. "This harassment of a vital industry that is under pressure in many other directions is completely unreasonable." Why did not the Minister avoid this by deferring the date of operation of the new measures?

The report highlights the difficulties faced by hauliers in finding land for new or improved workshops; the Association, it says, has repeatedly urged on the Government the need for realistic policies towards land use for transport purposes.

vehicles, the RHA stresses that it was not a Road haulage sponsor of the proposals "but one of its primary concerns will be met if vehicles comparable in gross weight to those

entering • the country from abroad are allowed to be run by British operators. Much more important, however, is the revision of permissible gross vehicle weights in the range up to and including the present limit of 32 tons. This could lead. .. to more efficient fleet utilization."

Labour relations in the industry, says the RHA, have suffered through the Government's ambivalent attitude towards trade unions and its defection on the interim Industrial Relations Bill. Workers have been encouraged to assert their supposed rights without regard to their corresponding obligations. The unions, "while pressing national wage claims through the Road Haulage Wages Council, have at the same time continued to demand individual 'productivity' agreements at rates far bigger than the statutory minimum figures, and often with little reciprocity".

Small hauliers are said to be despondent about the future, though "their enterprise and resilience .. . have created the industry that now moves the major part of the nation's goods".

In conclusion, the report pleads for time for the industry to become familiar with its new legislative boundaries "and with the minefield that the Government has sown within them. The Transport Act has created a machine of great power and the average haulier will require at least a year to become acquainted with its workings." However, if the Ministry was merciful, in two or three years the industry would emerge stronger and better than ever before, "but meanwhile tolerance will yield far more beneficial results than harsh punishments".