Who should boss the training boards? 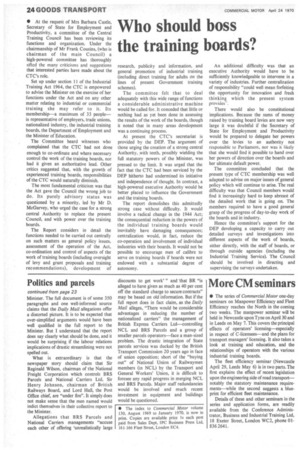 Page 26, 24th April 1970 — Who should boss the training boards?
Close
Noticed an error?
If you've noticed an error in this article please click here to report it so we can fix it.
Keywords : Central Intelligence Agency, Labor

• At the request of Mrs Barbara Castle, Secretary of State for Employment and Productivity, a committee of the Central Training Council has been reviewing its functions and organization. Under the chairmanship of Mr Frank Cousins, (who is chairman of the main Council) a high-powered committee has thoroughly sifted the many criticisms and suggestions that interested parties have made about the CTC's. role.

Set up under section 11 of the Industrial Training Act 1964, the CTC is empowered to advise the Minister on the exercise of her functions under the Act and on any other matter relating to industrial or commercial training she may refer to it. Its membership—a maximum of 33 people— is representative of employers, trade unions, nationalized industry, the industrial training boards, the Department of Employment and the Minister of Education.

The Committee heard witnesses who complained that the CTC had not done enough to co-ordinate and where necessary control the work of the training boards, nor had it given an authoritative lead. Other critics suggested that, with the growth of experienced training boards, responsibilities of the CTC would naturally diminish.

The most fundamental criticism was that the Act gave the Council the wrong job to do. Its purely advisory status was questioned by a minority, led by Mr D. McGarvey, who urged the case for a strong central Authority to replace the present Council, and with power over the training boards.

The Report considers in detail the functions needed to be carried out centrally on such matters as general policy issues, assessment of the operation of the Act, co-ordination and control of aspects of the work of training boards (including oversight of levy and grant proposals and training recommendations), development of research, publicity and information, and general promotion of industrial training (including direct training for adults on the lines of present Government training schemes).

The committee felt that to deal adequately with this wide range of functions a considerable administrative machine would be called for. It conceded that little or nothing had as yet been done in assessing the results of the work of the boards, though it noted that in many areas development was a continuing process.

At present the CTC's secretariat is provided by the DEP. The argument of those urging the creation of a strong central Authority, •,with teeth, possibly wielding the full statutory powers of the Minister, was pressed to the limit. It was urged that the fact that the CTC had been serviced by the DEP hitherto had undermined its initiative and independence of thought. In contrast, a high-powered executive Authority would be better placed to influence the Government and the training boards.

The report demolishes this admittedly strong case without difficulty. It would involve a radical change in the 1944 Act; the consequential reduction in the powers of the individual training boards would inevitably have damaging consequences; centralization would, in fact, reduce the co-operation and involvement of individual industries with their boards. It would not be possible to encourage men of calibre to serve on training boards if boards were not endowed with a substantial degree of autonomy. An additional difficulty was that an executive Authority would have to be sufficiently knowledgeable to intervene in a variety of industries. Further centralization of responsibility "could well mean forfeiting the, opportunity for innovation and fresh thinking which the present system provides".

There would also be constitutional implications. Because the sums of money raised by training board levies are now very large it was doubtful if the Secretary of State for Employment and Productivity would be prepared to delegate her powers over the levies to an authority not responsible to Parliament, nor was it likely that she would find it possible to hand over her powers of direction over the boards and her ultimate default power.

The committee concluded that the present type of CTC membership was well adapted to advise on major issues of general policy which will continue to arise. The real difficulty was that Council members would find it increasingly hard to keep abreast of the detailed work that is going on. The members required to have a good general grasp of the progress of day-to-day work of the boards and in industry.

Hence the committee's support for the DEP developing a capacity to carry out detailed surveys and investigations into different aspects of the work of boards, either directly, with the staff of boards, or through outside agencies (including the Industrial Training Service). The Council should be involved in directing and supervising the surveys undertaken.