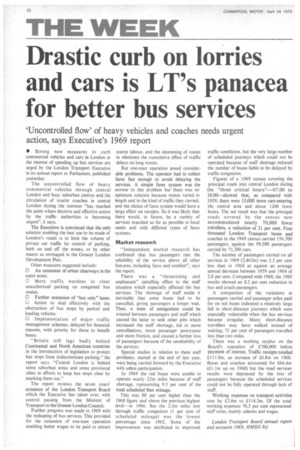 Page 24, 24th April 1970 — Drastic curb on lorries and cars is LT's panacea for better bus services
Close
Noticed an error?
If you've noticed an error in this article please click here to report it so we can fix it.

• Strong new measures to curb commercial vehicles and cars in London in the interest of speeding up bus services are urged by the London Transport Executive in its annual report to Parliament, published yesterday.

The uncontrolled flow of heavy commercial vehicles through central London and busy suburban centres and the circulation of tourist coaches in central London during the summer "has reached the point where decisive and effective action by the traffic authorities is becoming Urgent", it says.

The Executive is convinced that the only solution enabling the best use to be made of London's roads is to limit the volume of private car traffic by control of parking, both on and off the streets, or by other means as envisaged in the Greater London Development Plan.

Other measures suggested include: El An extension of urban clearways in the outer areas.

0 Further extension of "bus only" lanes. LI Action to deal effectively with the obstruction of bus stops by parked and loading vehicles.

O Implementation of major traffic management schemes, delayed for financial reasons, with priority for those to benefit buses.

"Britain still lags badly behind Continental and North American countries in the introduction of legislation to protect bus stops from indiscriminate parking," the report says. "Central London is behind some suburban areas and some provincial cities in efforts to keep bus stops clear by marking them out."

The report reviews the seven years' existence of the London Transport Board which the Executive has taken over, with control passing from the Minister of Transport to the Greater London Council.

Further progress was made in 1969 with the reshaping of bus services. This provided for the extension of one-man operation enabling better wages to be paid to attract scarce labour, and the shortening of routes to eliminate the cumulative effect of traffic delays on long routes.

But one-man operation posed considerable problems. The operator had to collect fares fast enough to avoid delaying the services. A simple fares system was the answer to this problem but there was no optimum solution because routes varied in length and in the kind of traffic they carried, and the choice of fares system would have a large effect on receipts. So it was likely that there would, in future, be a variety of services matched so far as possible to local needs and with different types of fares systems.

Market research "Independent market research has confirmed that bus passengers rate the reliability of the service above all other features, including fares and comfort", says the report.

There was a "threatening and unpleasant" spiralling effect in the staff situation which especially affected the bus services. The shortage of staff made it inevitable that some buses had to be cancelled, giving passengers a longer wait. Thus, a state of antagonism could be created between passengers and staff which caused the latter to seek other jobs which increased the staff shortage, led to more cancellations, more passenger annoyance and more friction, and caused a further loss of passengers because of the unreliability of the services.

Special studies in relation to these staff problems, started at the end of last year, were being carried forward by the Executive with urrion participation.

In 1969 the red buses were unable to operate nearly 22m miles because of staff shortage, representing 9.5 per cent of the total scheduled fleet mileage.

This was 80 per cent higher than the 1968 figure and above the previous highest level—in 1966. But the 2.3m miles lost through traffic congestion (1 per gent of scheduled mileage) was the lowest percentage since 1962. Some of the improvement was attributed to improved traffic conditions, but the very large number of scheduled journeys which could not be operated because of staff shortage reduced the number of buses liable to be delayed by traffic congestion.

Figures of a 1969 census covering the principal roads into central London during the "three critical hours"-07.00 to 10.00—showed that, as compared with 1959, there were 15,000 more cars entering the central area and about 1200 fewer buses. The net result was that the principal roads covered by • the census now accommodated nearly 70,000 fewer travellers, a reduction of 21 per cent. Four thousand London Transport buses and coaches in the 1969 census carried 156,700 passengers, against the 99,500 passengers carried by 71,300 cars.

A comparison of the variations in passengers carried and passenger miles paid for on red buses indicated a relatively large fall in short-distance journeys which were especially vulnerable when the bus services became irregular. Many short-distance travellers may have walked instead of waiting; 75 per cent of passengers travelled less than two miles.

There was a working surplus on the Board's operation of £700,000 before payment of interest. Traffic receipts totalled £111.9m, an increase of £6.8m' on 1968. Buses and coaches accounted for £66.4m (£1.1m up on 1968) but the road services results were depressed by the loss of passengers because the scheduled services could not be fully operated through lack of staff.