New opportunities for the bus 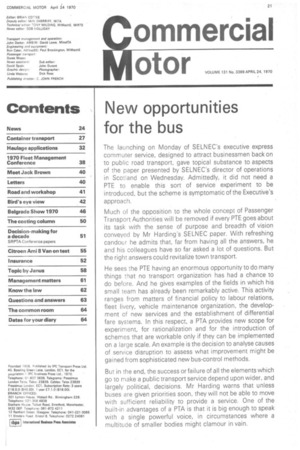 Page 23, 24th April 1970 — New opportunities for the bus
Close
Noticed an error?
If you've noticed an error in this article please click here to report it so we can fix it.
Keywords :

The launching on Monday of SELNEC's executive express commuter service, designed to attract businessmen back on to public road transport, gave topical substance to aspects of the paper presented by SELNEC's director of operations in Scotland on Wednesday. Admittedly, it did not need a PTE to enable this sort of service experiment to be introduced, but the scheme is symptomatic of the Executive's approach.

Much of the opposition to the whole concept of Passenger Transport Authorities will be removed if every PTE goes about its task with the sense of purpose and breadth of vision conveyed by Mr Harding's SELNEC paper. With refreshing candour he admits that, far from having all the answers, he and his colleagues have so far asked a lot of questions. But the right answers could revitalize town transport.

He sees the PTE having an enormous opportunity to do many things that no transport organization has had a chance to do before. And he gives examples of the fields in which his small team has already been remarkably active. This activity ranges from matters of financial policy to labour relations, fleet livery, vehicle maintenance organization, the development of new services and the establishment of differential fare systems. In this respect, a PTA provides new scope for experiment, for rationalization and for the introduction of schemes that are workable only if they can be implemented on a large scale. An example is the decision to analyse causes of service disruption to assess what improvement might be gained from sophisticated new bus-control methods.

But in the end, the success or failure of all the elements which go to make a public transport service depend upon wider, and largely political, decisions. Mr Harding warns that unless buses are given priorities soon, they will not be able to move with sufficient reliability to provide a service. One of the built-in advantages of a PTA is that it is big enough to speak with a single powerful voice, in circumstances where a multitude of smaller bodies might clamour in vain.